Reflections on the Moon

In a lecture at the Earth-Keeper 2014 Star-Gate Event in Arizona late last year, Richard Hoagland attempted to deal with a logical objection to his interpretation of this lunar image:

The image is from the Chinese Chang'e 3 lunar lander that touched down in Mare Imbrium on 14th December 2013. Hoagland loaded it into Photoshop™ and used the EQUALIZE tool. I commented on the technique a year ago when Hoagland first explained it, and astronomer Stuart Robbins did his typically rigorous job on it, on 1st May 2014. Hoagland tells his fans that the CCD detector noise in the sky is not noise but part of a vast glass dome over Mare Imbrium.

The logical objection (other than the simple fact that the whole idea is crazy) is that the same noise pattern can be seen everywhere else in the left half of the image where there is black. Specifically, in the deep shadow under the spacecraft. In the Arizona lecture, Hoagland pre-empted this objection  (at 1:27:00 in the Youtube vid) by reminding us that the lunar regolith is rich in micro-particles of glass, and that therefore it's not surprising that we see that pattern down there. It's simply a reflection of the sky.

Corollary: From chest height, standing on the Moon, the all-black sky will be seen, reflected, in the lunar surface.

Experiment: Go to the Moon, take a good quality photograph from chest height. 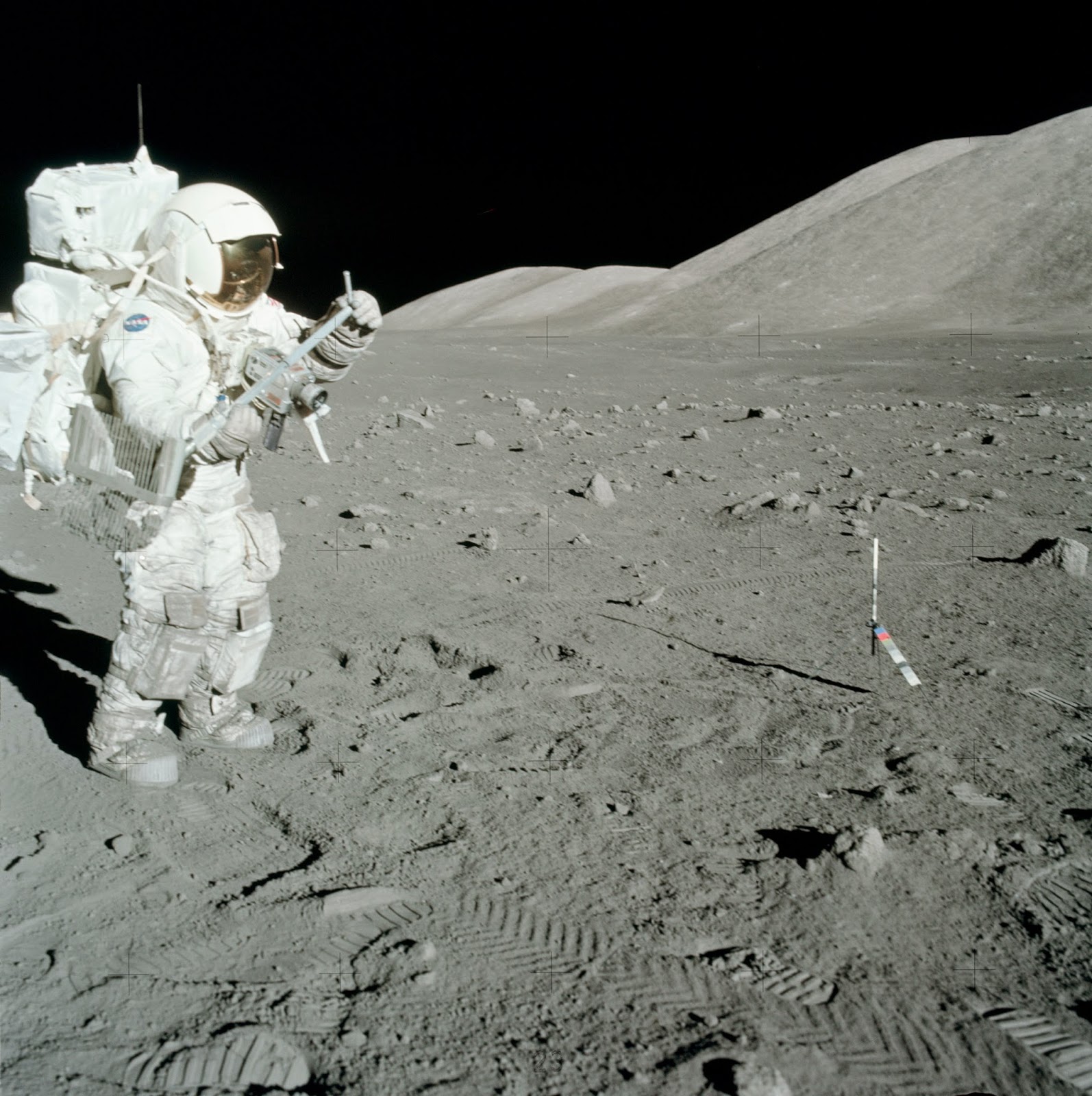 image credit: NASA/JSC
The proposition is falsified.
at 8:07 AM

Photographic cameras such as the medium format Hasselblads, supposedly used to take photographs on the Moon, do not function in the extreme below freezing temperatures of Outer Space nor in supposedly, zero atmosphere as on the Moon.

I think Hoagy has a special button on his EQUALIZE tool called "color my pixel" :-) and "glass dome fixer"

although it is tempting to rebuttal Riply's prattle and ask a silly question in return but then again...she never answers...not even when the the questions are sound and logical...so why bother :-)

Interesting article, I buy it. It's too bad that new reporting at the time of the Moon walks didn't cover the aspect of timing. After all, it's not as if the Astronauts were out and about all day. It would have been very interesting if there had been commentary about the when and duration of the outings.

An interesting page as well. Again, it's too bad that there no stellar reporters from the BBC to report all this, at the time of the event. That would have prevented much confusion, and doubt that the report you link to wasn't manufactured after the fact. Richard C. Hoagland and Walter Cronkite sure never mentioned any of that.

Who produced that tripe?

Prior to Netscape, did the DoD have the capability to display or transfer images over the DARPA Net?

The point is that if there are questions as to the authenticity of the NASA Appolo Missions to the Moon, it's due to the fact that neither NASA nor the press did an adequate job of explaining the itineraries and the reasoning for them to the public. It might well be argued, that the omissions were intentional, in order to deliberately create doubt. For instance, NASA still maintains the falsified finding of an arsenic up-taking bacteria which ostensibly according to NASA, validates the likelihood of extraterrestrial life in Outer Space. As the science has failed to be replicable by peers who have made the attempt, NASA commits fraud against the US taxpayer, by not retracting the agencies support of the fallacious study. NASA continually presents mixed messages, which result in uncertainty in a great, many, cases. Even whether NASA know all the true facts or not, is obfuscated by this deceptive practice.

Today, we can go to a website and see a supposed diary from the Astronauts on the Moon. The DARPANET existed at the time. Could it have hosted the data, and preserved it for the Internet, today?

It might be an accurate accounting, or it might be the result of faulty memory due to the length passing time from the actual events to the publishing of the material. In any event, it goes without challenge from the press.

« ...neither NASA nor the press did an adequate job of explaining the itineraries and the reasoning for them »

On what are you basing that? NASA/MSFC made every (well, almost every) live transmission from the Moon available to accredited press. Knowledgeable PAOs were available to explain what was going on. After every Apollo flight they made a film documentary about it, and most of that footage was pretty good. The media I was aware of at the time gave Apollo consistent front-page coverage, with the exception of Apollo 12 which had camera problems.

Binary-to-text encoding pre-dates Netscape by decades. I'm not sure whether DARPANET had the capability, though. Not my area of expertise.

Further research: ARPANET was first used in 1969, declared operational in 1975. It basically ceased to exist in 1983 when MILNET took over classified comms.

uuencoded binary data would have been possible late in the life of ARPANET, but not during the timeframe of Apollo.

If only Richard C. Hoagland had, had the foresight to advise Walter Cronkite to report something along the lines, as: 'The Astronauts will go out for a walk on the Moon today at such and such a time, Eastern Time, at such and such location on the surface of the artificial, intelligently controlled satellite, because the temperature on the Moon is not too hot and not too cold, so the cameras won't seize up from the heat or freeze up from the cold, and the film won't become brittle and break or break out in flames.'

are you surely sure about the "liveliness"of these so called live transmissions???

I'm asking this because if one watches the reproductions of these so called live transmissions most fail to appreciate the lack of time delay between any given question and answer by astronauts on the moon versus control stations on earth. Given the distance between earth and moon there should at least be a delay of approximatly 3 seconds. I don't buy a possible excuse that these transmissions were edited after the fact meaning cutting out all the delays between questions and answers for esthetic reasons because there were "live" live feeds in those days also without time delay due to distance.

One can have lengthly discussions about reflections, spacesuits, moondust and moist, dodgy pictures and what have you all in order to proof or disprove astronauts ever being on the moon, but one can not "fix" missing time delays in their conversations due to distance.

Yes, I'm really sure about the live bit. The actual time of the major mission events matched the MET times in the press kits. And I remember the time delays very well. The Quindar tones helped keep track of them.

You might have seen edited packages in which the delay has been cut, but all the video embedded in the Lunar Surface Journal web pages is "as live."