I see where both Hoagland and Bara now have pages on the rational wiki. Appropriately enough, since the RatWiki exists to mock pseudoscience. It's "round up the usual suspects" time -- David Icke, George Tsoukalos, Graham Hancock, David Wilcock, , Linda M. Howe.... need I go on? (Hmmm, how come Sean David Morton isn't there? Surely even criminal pseuds need mocking.)

RatWiki has the wikipedia look, but it's wikipedia without the citation nazis. So it's much, much looser and sarcasm is encouraged. Permanently upping the batshit ante is one sub-head in the Icke piece, for example.

Coincidentally, I sent the following message to Mike Bara a few days ago:

Know what this is, Mike?

It's the actual vs. planned orbit of Explorer 1. It was drawn to scale by your former co-author Richard "Fraud" Hoagland.

Look at it. Does that look like an orbit that is 60% more energetic than planned, overall? If you agree that it does not, you are agreeing that an entire chapter of 'The Choice' (ch.12) is poppycock. Balderdash. Codswallop.

Anybody who doesn't already know what Mikey wrote in chapter 12, and why it's so catastrophically wrong, can see a nice concise explanation on the rational wikipage.

Update:
This is what the orbit would have looked like if it had been 60% excess: 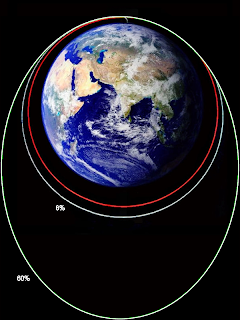 A few points. First, Hoagie blames space Nazis with death rays for 911. Second, the Explorer 1 nonsense was due to Hoagie's screwed up math that Bara (stupid puppy that he is) just followed along. Third, the Hoagland article misses the whole HD physics thing. It's only his greatest contribution to mankind.

Linda M. Howe always sounds so sincere, and she certainly reports on some fascinating fringe stories. What's your opinion of her? She doesn't strike me as a huckster of Hoagland/Bara proportions. She does get taken in by some silly stuff, though.

LMH is nowhere near as objectionable as C2C's regular New Age females. I learned about the "white nose" syndrome afflicting the brown bat population from one of her reports.

The only thing is, her voice is totally unsuited to radio. She should write the scripts and do the interviews, then turn the speaking duty over to someone who doesn't screech.

Difference between LMH and some of the others (Hoagie and Bara included) is that she's a reporter and investigator, so she's simply relaying what others might invent, along with more informed stuff.

Whereas Hoagie etc, simply make stuff up and relay it directly.

Or to put it another way, there's a difference between a journalist who's BS filter is often bypassed and fiction writers who are taken far too seriously by the ill-informed.

I think the problem with woo peddlers is that people confuse opinions with facts and facts with opinions. That's how stuff like the global warming hoax or creationism get started. "That's just YOUR opinion".

No it's not. It's proven science. My or your opinions are irrelevant. Opinions don't change the facts. You can have an opinion that the World sits on the back of a giant tortoise. That doesn't make it true. Even if every person in the world believes it, it still isn't true.

If you don't understand the underlying science of something, your opinion of it is worthless anyway.

Eventually, believing harmless ideas becomes outright dangerous, whether it's not taking your medicine because Homeopathy cures cancer or wanting to assassinate Obama because he's a non-American Antichrist.

Lives get destroyed and people die from believing false ideas. That's why it's important to take every opportunity to point out Hoagie and Mike's bullshit. You'll never make them think different but hopefully, others will read this site and see just how stupid their ideas really are.

I think it's not that LMH's voice is screachy; it's that her delivery is stilted. She always sounds like she's reading off a page. And she probably is.

I just added an interesting update.

Have you e mailed C2C with the link to the ratwiki site? The thing is, Hoagland in particular would see it as a bonus, as it 'staggeringly confirms' that everything he's said is correct, because yet another anti troofer is trying to supress him with ridicule..

If the C2C producers are doing their jobs, they're already familiar with all that anti-troof propaganda.

As for Hoagland, I doubt he reads it. He once said of his wikipedia page "It's been edited and re-edited by NASA, and it's full of lies about me and my work."

I can't see any evidence that NASA has taken the slightest interest. Paranoia again, I suggest.

Of course no one at NASA cares about Hoagland. They're too busy actually exploring places like Mars to care about some kook and his Power Point presentations. They do while he rants.

The name `The Invisible College' was first used in the 1500s by early rationalist scientists who co-operated covertly to avoid the attentions of the Church, the then-controlling ideology, and (Vallee tells us) was resurrected by late 20th century scientists again confronted by a similar controlling ideology: that UFO and related phenomena do not exist and deserve no consideration. This latter-day Invisible College reportedly shared data and ideas about the UFO phenomenon in secret in order not to jeopardise their careers in the prevailing restrictive ideological climate. Where once people were burned at the stake, now they are merely ridiculed and ostracised for daring to be rational and open-minded.

The basic argument of TIC, in a nutshell, is that UFOs and the associated phenomena which surround them cause changes in the life-attitudes of percipients. The phenomenon is without question a nuts-and-bolts reality with INTENDED psychological and physical characteristics. Physical effects on the environment serve to reinforce to the percipient that his encounter was real: such effects are more important than proving to third party investigators that something physical occurred. Vallee puts forward the thesis that these phenomena are possibly not due to extraterrestrial visitation but are collectively a kind of deliberate control system, like the heating thermostat in a house, designed to adjust perceptions in the human race and challenge existing societal thought paradigms. This control system, according to Vallee, operates by introducing elements of absurdity and dislocation from normal consensus reality as tools to move percipients into a new expanded consciousness. The ridiculous/absurd nature of many encounters keeps most scientists away from the evidence, as they are in thrall to current strait-jacket thinking and will not step over the boundary into unknown territory, and again this element is somehow intended by the agency controlling the phenomenon.

A good news reader, reads as if they are speaking naturally. Linda, however, sounds like she's reading. I say in fact that she has written everything that she has to say, until after her presentation. A listener buster her for it once, and she denied it vehemently, feigning indignation.

I don't know enough about Jacques Vallée to comment authoritatively. He's in the RatWiki but only as a stub. If you're info'd up on him, you might perform a service by fleshing out that article. The IC would be an interesting addition.

Vallee is critical of Linda Molton Howe as being naive. He finds UFOs to be a real, significant phenomenon, which few if any are able to study objectively, but many have much disinformation to disseminate on the subject. Some of that disinformation, he suspects to be intentional.

Mike doesn't believe in pareidolia (again), and has posted on Youtube to say so: http://www.youtube.com/watch?v=m4IxzVCWJxc&feature=youtu.be&a

Yes, a concept even a 5 year old can understand (hey look, that cloud looks just like a dragon!) is beyond Mikey's comprehension.

You are not logged in. Your IP address will be recorded in this page's edit history, and will be visible to anyone. See our privacy policy for further information.

If I have to sit through another long drawn out, totally gay (in the South Park sense), suspense music video of still images of rocks on Mars or the Moon, claiming they're alien life forms or crashed Klingons, I'll go postal on somebody.

Still, this one's a keeper:
Mike Bara
There is no such thing as pareidolia. It was invented by a debunker in Skeptical Inquirer in (@YouTube http://t.co/SEP7xXgd2S)

Yep, seen it. I think his brown-nosing Ann Coulter on twitter (where the twits on the internet live) is more entertaining....

By the way, Coulter's article on the RatWiki is pretty funny.

Thanks for the tip about the Coulter RatWikie--fun stuff indeed! If you don't mind unflinchingly graphic (and absolutely hilarious) depictions of some rather extreme sexual activity, be sure to hit the second link in the Quotes section, "Thanks for not staring at my adam's apple." Somebody told me about that site a few years ago and it made me laugh until my face and stomach hurt.