Following up the previous post on this blog, I came across further dishonesty in this MicroSet timing trace: 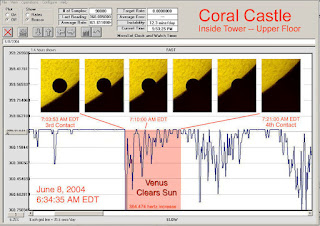 Recall what's going on here: Richard Hoagland has gone to the Coral Castle in Homestead, Florida, at the time of the Venus transit of June 2004 to attempt to verify his hypothesis that interaction between the Sun and the planet Venus creates a "torsion wave" which temporarily reduces the inertia of anything it interacts with. His test apparatus consists of an Accutron wristwatch connected to a MicroSet watch timer, displaying on a laptop computer screen. A system diagram is here. The hypothesis is that the "torsion wave" will increase the frequency of the tuning fork controlling the watch. Hoagland wrote:

To make a LONG story shorter ... the torsion/HD effects of Venus -- as it was physically departing the western edge of the Sun (as seen in the Florida sky at dawn ...) -- were simply astonishing!

Based on the major frequency "jump" of the Accutron tuning fork occuring EXACTLY at the moment of 3rd Contact (when Venus' edge just "kissed" the Sun's western limb) -- from ~360 hertz (cycles per second) to 364.5 hertz -- the extrapolated daily acceleration of the Accutron at that rate was about twelve minutes per day! For a watch normally rated (by Bulova) as "... accurate to a minute a month." Clearly ... unquestionably-- "Something" had reached out from Venus at the precise moment it was geometrically projected against the visible edge of our closest star -- when, remember, Venus was ~25 million miles away from Earth -- and (somehow!) "touched " our little Accutron detector ...

Hoagland provided one other trace, from later that same morning: 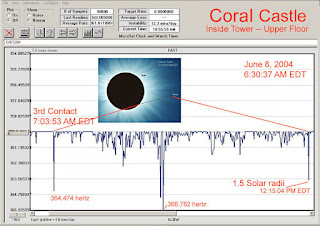 This trace covers a longer stretch of time—from third contact all the way through 12:15 EDT, when he says that Venus was 1.5 solar radii away. He draws attention to a further frequency spike at that time without commenting on how that fits his hypothesis, and completely ignores the biggest spike of all, to over 366 Hz. There's no time scale to measure by, but that spike can be interpolated as occurring at 09:06 EDT, unrelated to any actual astronomical event. The simplest, and therefore most likely, explanation for all this woo-woo is that Richard Hoagland's wristwatch is crap.


"Let me through, I'm a world-famous pseudoscientist"

Hoagland has said he took the same test apparatus to Stonehenge last August, and although he was shocked to discover that he was not permitted to enter the stone circle, he nevertheless says he achieved similarly "astonishing" results. If he ever publishes them, I'll study them with interest. Don't forget, too, that we're due for another Venus transit next 6th June.

One of the problems with this "proof" is that it looks like the time part of the graph was actually added later (with those cool pictures of Venus crossing the sun), so we really don't know when the spikes occurred. Even giving Hoagland the benefit of the doubt though doesn't really help him here though, since (as you pointed out) the biggest spike happens after Venus has crossed the Sun completely. In the end, we are left with a graph that signifies nothing. That's Hoagland's career in a nutshell.

Even if the times were right, they'd be useless. As you point out expat, first contact of Venus as seen from south Florida means nothing with regard to when a purported torsion effect would occur. Parallax would result in first contact seeming to occur at a slightly different time in Rome or Paris (and, for that matter, the transit wouldn't have occurred at all at that time as seen from Mars and other Solar System bodies). It really is just whenever-it-fits-for-me-is-right idiocy.

I find it strangely ironic that he chose Coral Castle as a location for his work. Not only is it supposedly built by forces unknown, it was also the shooting location for the sci-fi classic "Nude on the Moon".

Sounds like the right place for Hoagie to retire (if he can ever afford to retire).

Stonehenge has been closed off to visitors for at least 10 years now. Between tourists and woo-woo believers, bits of stone kept disappearing so the authorities decided to close it to the public.

Or perhaps it's a giant conspiracy. It must be 19.5 degrees away from something.

strahlungsamt,
I suspect Hoagland's interest in Coral Castle had more to do with Art Bell's (and thus C2C's)interest in the place. Hoagland tends to jump on things he thinks will get him air time on C2C. His "experiments" there did just that.

I seem to remember Hoagland playing the Accutron game at Silbury Hill, too. Perhaps world-famous pseudo-scientists are allowed to climb up it, although my information is against that.

But neither his Stonehenge or Silbury excursions coincided with potentially torsion-generating astronomical events, AFAIK. So I wonder what he thought he was detecting.....

This official page indicates that world-famous pseudo-scientists, and everyone else, are kept away.

Your link from NASA Goodard:

is NOT for Miami, but Alabama to Missouri.

Circumstances for the United States - 1


Furthermore, it was last updated:

Go to the link, do a right click and see:
"view page details - general"

I have been in the inner circle twice. It's not that hard to make arrangements with English Heritage if RH had chosen to do so in advance. Perhaps the torsion effects upon the area made them nervous.

The Goddard link provides a table of many Eastern states including Florida. As long as it was updated later than the date of the transit, it's good.

Your linked page is titled:
"Alabama to Missouri"

The contact times on your linked page for Miami are stated in Alabama/Missouri time, not East Coast time.

His instrumentation seems dodgy. He could revisit the experiment in June, next Transit. He won't because he's tired, lazy and sad.

Misti: No, the JPL eclipse page follows normal astronomical convention by giving times in UTC, which is the same as GMT -- EDT is GMT-4.

Why is the linked Goddard page titled:

Misti: You'd have to ask the compilers, although it's a bit doubtful that anyone would remember now.

I wonder what seekrit messages are hidden in "Nude on the Moon"?

Goddard would be unable to say why it titled Venus Transit Contacts page as "Alabama and Missouri"?

Nice try Ex Pat, but you are using the wrong chart.

Misti: Can you point me to the right one?