I suppose nobody tunes in to Ancient Aliens (History Channel) expecting to be shown the truth. So I can't really pretend I'm shocked—shocked!—that Season 8 Ep 2 "NASA's Secret Agenda" was full of balderdash.

And yet, when that sorry excuse for a television "documentary" series touches on a subject you know well, it gives a special kind of pain. Watching "NASA's Secret Agenda," I felt like Jason Colavito does when the series covers his special subject, history of mythology (follow that link and you'll see Colavito describing this episode as a "steaming turd." That's not nice, Jason. Oh, perhaps it is.) This episode devoted itself to saying, about 20 times in 20 slightly different ways, that Wernher Von Braun was such a genius that he had to have acquired some secret knowledge from—you guessed it, I'm sure—Ancient Aliens. As Colavito correctly notes, the Soviets of that era seem to have done very nicely without alien intervention. Calculation of how to get to the Moon on an elliptical semi-orbit is mathematics, folks, not mysticism.

The history of early spaceflight (well, some of it) was told with only a few minor errors. Then  around the 30:00 mark, on came Mike Bara and the lies came thick and fast. Describing the Apollo 17 mission yet again, in a narrative he stole from Keith Laney, Bara talked about the "mysterious" hexagonal-shaped mountain astronauts Cernan & Schmitt spent some time at. The video showed us this: 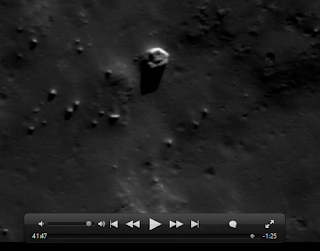 He was talking about South Massif, which actually looks like this: 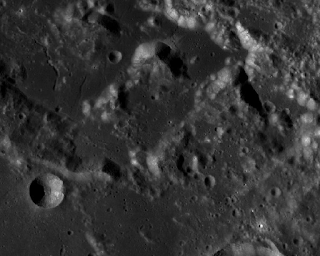 Is that honest television documentary reporting? Or pure bullshit?

Negatives
Then it was on to the skull-like rock in crater Shorty, which Richard Hoagland dubbed Data's Head. This blog has covered that piece of nonsense again and again. The narration said "Bara and Hoagland obtained early-generation negatives from NASA..." However, IT'S NOT TRUE. Here's what Hoagland told Kerry Cassidy about his perfunctory research:

[W]e've gotten two copies of film - not just the web but film, (which is really crappy copies that were sent to us), and what I was able to do was a computerized robot comparison with C3PO.


NASA does not hand out "early generation negatives," especially not to hostile nincompoops. To be fair to Mike Bara, those sins were committed by the producers and writers, not him personally. But for me, re-telling the lies about South Massif and Shorty is quite bad enough. Ugh.
at 10:41 AM

What IS that first image - the one Bara claimed was South Massif? Was there any context given?

He should have talked instead about this boulder (jpg) at Taurus–Littrow. Way more intriguing and detailed! By the way, the "hexagonal-shaped mountain" is in the background to the right in that image.

Another close-up. Such an endless stream of images not showing anything hexagonal shaped!

Thanks Dee. The feature marked A in the second frame is Apollo-Nansen, not a crater but a natural trench at the base of South Massif. In The Keith Laney myth, it's really a SEEKRIT entrance to the underground alien base. Cernan & Schmitt were in there exploring during the 20-ish minutes they were off-camera (never mind that, in the audio, we clearly hear them collecting rock and regolith samples, and the sample numbers match the actual samples in the official inventory of the mission.)

Here's Apollo-Nansen. I've never understood what was so amazing and secret about it. http://bit.ly/1M4aYOY

“This is ancient technology, and it’s still floating above the surface today. No one knows how old it is, but we do know that it came from a very technologically-advanced species. It has, the ultimate battery,” a statement from the UFO Sightings Daily, a website devoted to possible UFO detections on or above our planet.

(Oh, and it's RT so please don't read the comments)

The 'levitating sphere' is somewhere close to the middle of the image, in the background.

Carolb has found the hexagon they used. It's not completely fabricated as I thought, but a small feature way down at 66.83°S, 128.12°E. It's not a massif at all.