It was Richard Hoagland's seventieth birthday last Saturday, and the occasion was marked publicly by yet another two-hour radio interview. Not on Coast to Coast AM, as I'm sure he would have preferred, but on a two-bit internet podcast associated with that madman David Icke. The interviewer was not Icke, but a bloke with a comedy Irish accent by name of Richie Allen.

We got into numerology immediately, as Allen asked Hoagland how it felt to be 70, and Hoagland replied that, as 70 = 10 x 7, and seven is an important number in hyperdimensional physics (Eh??? Important how??), that must mean that great things are about to happen in the field he's been researching for 35 years. Oh yes, Great Things About To Happen. Where have we heard that before?

Then it turned into a name-droppathon, as he reviewed his brilliant career. Walter Cronkite, Arthur C. Clarke, Carl Sagan, Isaac Azimov, Margaret Mead and Jules Bergman all got their name-checks. We heard again how he was responsible for naming the first Space Shuttle Enterprise (except he wasn't -- the letter-writing campaign was organized by Betty Trimble) and how he unearthed the Brookings Report and its cautionary message to NASA (except he didn't --  Don Ecker and Lee Clinton did.) Well, I suppose you can't really blame an old man for reminiscing about the far-off days when he actually had a job and was doing something useful.

About the Brookings Report,note 1 his wrap-up was as follows:


42:55 "For the next 50 years -- from the time of its inception in 58 -- NASA has steadfastly denied any and all evidence that they've ever detected anything that would even hint at the possibility of living organisms anywhere in the solar system."

This is to ignore the hundreds of  scientific papers published by NASA scientists on Martian water, organics, and methane. I know it's fashionable to denigrate Wikipedia (often for good reasons, it must be said), but the wiki-article on Life on Mars is pretty good. It includes the sentence "The search for evidence of habitability, taphonomy (related to fossils), and organic carbon on the planet Mars is now a primary NASA objective." Hoagland is simply wrong.


"I'm a data-driven guy. I don't make claims -- regardless of what  my acerbic and over-the-top critics say all the time, because it's disinformation. I try to stick to facts -- I try to stick to things which you can independently verify. I try to stick to official sources, and official data. What I don't do is to pay a lot of attention to leaks."

That was Hoagland, at 1:29:20 into the interview. Oh, how we acerbic critics wish it were true. But at 1:42:00 we got this astounding piece of flim-flam: Absolutely classic Hoagland.


"What's the one thing that would change everything on this planet? If we were to go to the Moon and bring back high technology. Absolutely tons of stuff are preserved underground. Don't look at the cratered surface -- think 200ft, 1000ft, a mile down, two miles down. There's obviously (emph. added) a ton of stuff in perfect preservation, particularly if it's been exposed to a vacuum. You bring that stuff back, you back-engineer it, you create electronics, you create power supplies, you create medicines, you create solutions for all kinds of intractable diseases, like cancer for instance -- that have already been worked on and perfected by the guys who went before us, who are part of the human family. We're not talking about aliens, we're talking about the human race, just a lot older and a lot more incredible than we've been allowed to believe up until just yesterday. And you do all that in the private sector. Not only would Musk make billions and billions and billions more, but he changes the direction of the planet for the better. And that's why Elon Musk must succeed, and all the other private guys must succeed--because they ... are the keys to the kingdom, the keys to the future of the human race, and the keys to the transformation of this planet from the hell it is for most people to the Garden of Eden it could be again if this information was made freely and publicly available."

Not at all a bad speech, especially as it was totally off-the-cuff. However, it's pure fantasy, of course. I wish I had Hoagland's eloquence, but I'm glad I don't have his self-delusion.

Doing Hoagland & Bara's math for them

Recall that a vitally important tenet of Richard Hoagland's mythology, endorsed by Mike Bara, is that the number 19.5 arises naturally from the geometry of a tetrahedron.

Hoagland & Bara are both dunces at math, and could never show you the proof of this theorem — the original math was done by the cartographer Erol Torun. However, I enjoy math and I present for your entertainment and edification a simple proof:

Theorem: If a tetrahedron is inscribed within a sphere, with one vertex at the North pole, the other three vertices will lie on the 19.5° South latitude (and of course the same goes for the South pole/North latitude).

Work. It can be shown that the center of a tetrahedron divides its vertical height in the ratio 3:1 — if h is the height, the center lies 3h/4 from each vertex.
This is proved by similar triangles—one proof can be found here.

The center of a tetrahedron must obviously also be the center of an exscribed sphere, so 3h/4 then becomes the radius of the sphere:

The latitude of the three lower vertices is given by the angle θ.

Hoagland & Bara are welcome to use this proof in their future work, preferably with attribution to The Emoluments of Mars, although we know they think nothing of "borrowing" other people's work and slapping their own © on it. They can probably draw better diagrams than I can. Cheers.

NOTE THAT this merely confirms the geometric fact. It in no way endorses Hoagland & Bara's mystical ideas about energy appearing at the 19.5° latitudes. That's still as much balderdash as it ever was.

Update 10th April:
Last night, in the course of a two-hour stint on Coast to Coast AM, Hoagland spoke about the "lights" on Ceres, photographed by the Dawn  spacecraft back in February. 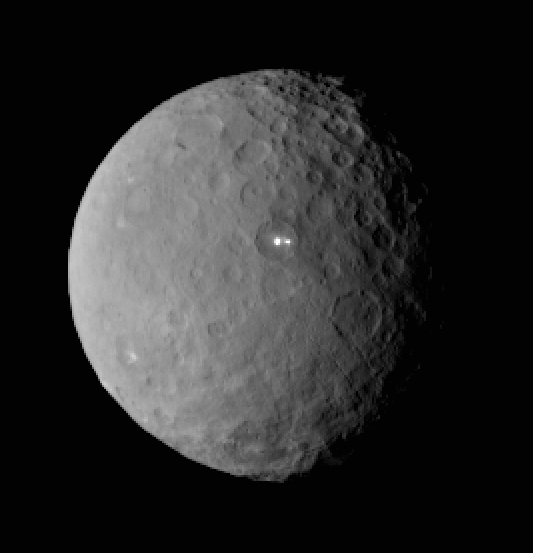 I rolled my eyes as he said—perhaps inevitably—that the lights are at 19.5°. The text on the C2C web site is as follows:


Enterprise Mission analysis, using the latest refined "Ceres cartography," has discovered that the lights, remarkably, light at ~19.5 degrees North ... and are aligned north of due east by ~19.5 degrees.

I can't confirm that so I'm calling it a barefaced lie for the moment. If it later turns out to be true I'll let you know and do a mea culpa.

Re-update:
Research by binaryspellbook shows that the lights are at "about 19 degrees North." OK, good enough. MEA CULPA.
at 12:41 PM 39 comments: