Jimmy Church is the radio chat-host who runs Fade to Black and sometimes comes out of the bull-pen to substitute-pitch for George Noory on Coast to Coast AM.  Back in June 2016 I commented that I rather like Jimmy—he's a lot better than Noory, anyway.

Mike Bara's guested on FtB Radio more times than I can easily remember—I've certainly blogged about three or four of them. I definitely blogged when, in February 2015, Mike was on C2C-AM with Jimmy subbing as host. That was when Bara said "I’ve  gotten to the point now where I’ve completely blocked out the people that attack me." Those two boys were very chummy, and not just on the air either. Here they are cuddling up at the Conscious Life Expo that same year—same month, in fact. The fat guy on the left is Tom Danheiser, C2C-AM line producer.

Here's another, not sure when this was but Jimmy seems the worse for...  wear? This time the guy on the left is Jason Martell, another populariser of ridiculously false information like Bara. 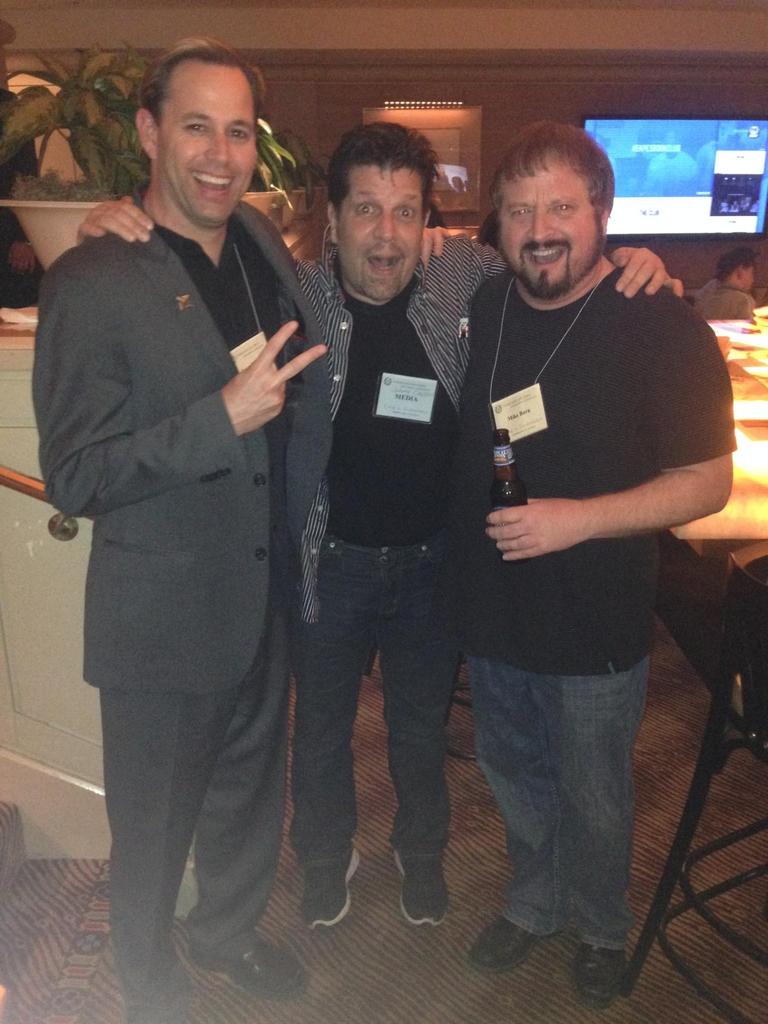 « Nothing turns to hate so bitter as what once was love »
--Laurell Hamilton, paranormal novelist

Now, sad to say, the hugs have turned to insults. It started on 14th September, with Bara tweeting "If you believe... [insert six standard conspiracy topics]... You might be an imbecile. You might also be a candidate for a guest spot on the Jimmy Church show." 15 days later Bara called Church "a small-time drunk." In answer to Larry Fletcher, he tweeted that he hadn't talked to JC since june, and "I will never speak to him again."

And yesterday the feud got even hotter. 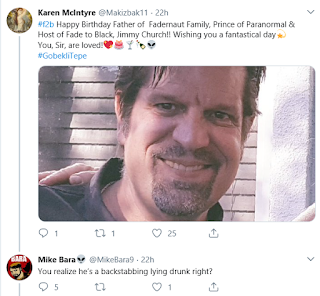 Karen McIntyre responded "Get off of my tweet, Mike. Not the best way for you to represent yourself and it doesn't sit well here." Predictably, Bara's rejoinder was "Am I supposed to give a shit?"

If anybody knows what this bitchery is all about, please let me know. I suspect it's the Gaia "alien mummy" story, but that's just a guess. Certainly that was one of the topics listed in the 14th September tweetery.


Thanks to Chris Lawrence for monitoring the tweetosphere
at 3:32 PM

I think he has gone round the bend, as they say...

Got to love the books that just happen to be propped up in the background :D

Then again, it's according to Hoaglandish Tradition to tragically fall out with every supporter or friend plus dog after a while. Somehow it must be part of the little engine that could pump the hot air around in circles over all the decades.

Psychologically, all being speculative of course, this could serve several goals: the enemy as betrayer or simply opponent props up ones own position while at the same time the target can serve as scapegoat and all undesired and repressed properties can be assigned, e.g. "irrational", "drunk", "unreliable", "rude" or under influence of some "external powers". The spectacle can be instructive to behold as they are typical human tendencies.

Bell Gab is back up.

Knowing both of these men well - NONE of this from either side surprises me. AT ALL. LOL.

It's just funny to see it finally.

Not directly related to Mike Bara, but I don't see any other current thread where it would be relevant to post - Karl Wolfe, the guy who became famous with his claims in the Disclosure Project that he had seen images from the Lunar Orbiter in 1965 of alien bases on the far side of the moon (two years before the far side was photographed by the LO, no less!), has died in a traffic accident.