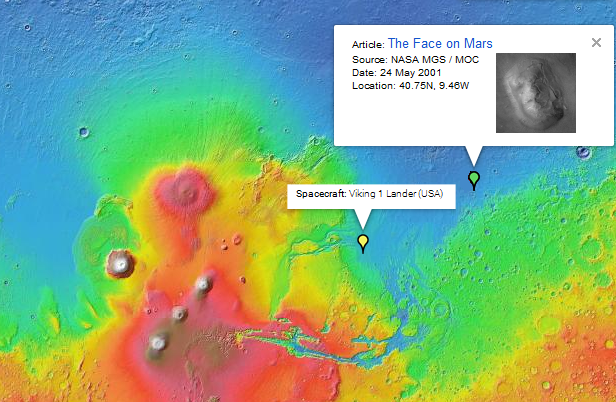 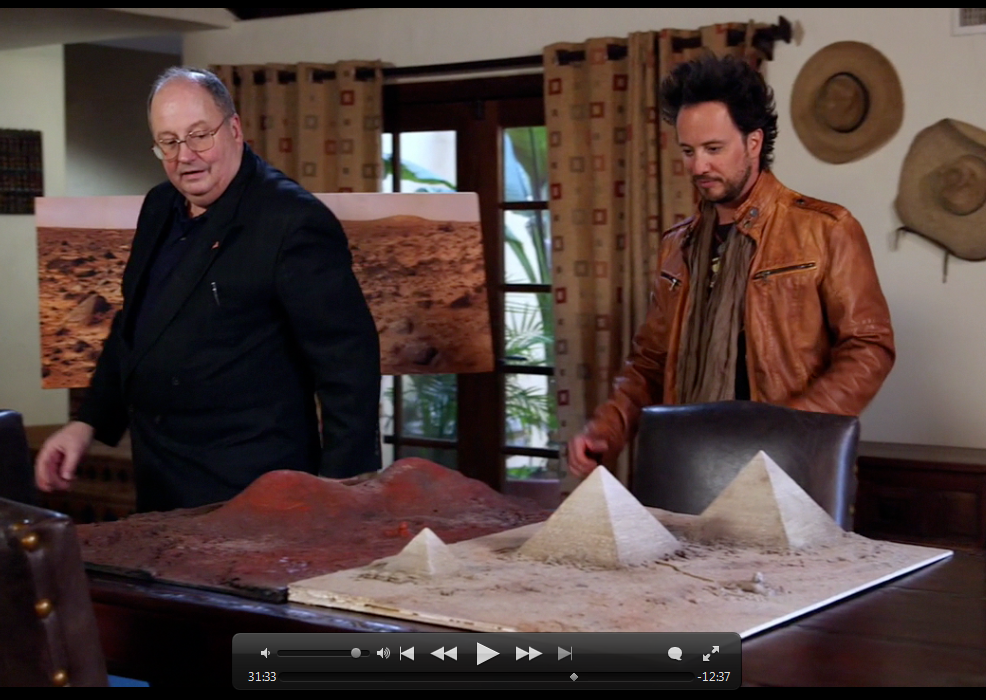 
[1] Brandenburg speculated that, even if the Twin Peaks don't look like pyramids now, maybe they did when they were built, and millions of years of erosion has reduced them to the pitiful state we see now. The same thing has been claimed for the 'Face', too, and it's what is known in logic as argumentum ad excremetum torii. It's basically taking a desperate hope, unsupported by anything, and dressing it up to look like evidence. He also trotted out his theory about Xenon 129/132 ratios, "proving" that there was a nuclear war on Mars once. Stuart Robbins disposed of that one a year ago.
at 12:32 PM

Has Giorgio Tsoukalos ever claimed that his coif was created by Ancient Alien stylists? As an old Babylon 5 fan, this is the only way I can ever think him.

For what it's worth, somewhere I read that Viking 2 was targeted initially for Cydonia (But nowhere near the face), but it was moved to Utopia Planitia after Viking 1 images showed the landing sight was too rough.

No, the exact wording was that Viking not landed at Cydonia as originally set, was because OF ALL 'THE NASTIES DOWN THERE'! LOL.

Bit OT but want to read someone with Mikey's Master Debating superpowers take on RationalWiki?

@SA
That rant certainly reads like pure unadulterated single malt Bara. It has all the hysterical ad hominems and total lack of rational arguments that our Mikey is so famous for. Thanks for the link, it was a fun read.

Not to mention a total ignorance of basic English grammar!

That historyblogcritic does not deserve the Bara award in my opinion. Actually I noticed that blog still allows opposing views in the comments and the author actually admits he's wrong at times: "No need to call me names over it. It get it now, Thanks" posted under the article "RationalWiki’s OCD like obsessions".

If only Mike would have such humbleness!

Mike recently posted a snide comment about Neil DeGrasse Tyson on his Facebook page. Does anyone know what that's all about other than him being envious of a real scientist who's way more successful and popular than he is?

"Most physicists are blithering idiots"
--Mike Bara, in 'The Choice' 2010

NdeGT is a physicist, therefore The Great Mike Bara thinks he's an idiot. Just wait till Cosmos gets to the question of dark matter. Scorn will pour off Mike's FB page.

I should have known. It was silly to even mention it. After all, any right thinking person will tell you that the laws of physics are merely suggestions.