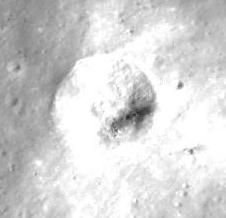 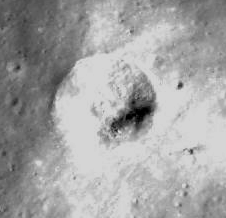 Schiller is another good example of an elongated lunar crater:
http://bit.ly/1bdTb6L

Problem with that image is that it's not orthorectified to show all the other craters as circles.

Something's gone a bit amiss with the ACT-REACT quick map. It seems not to be ortho-rectifying at the moment.

Or orthographically rectifying, as George Haas would put it!

The Quick Map has changed layout since I last looked at it. You used to be able to look at polar projections, but I can't find that now.

I was looking around bookface a while back, at pages about Mars and moon anomalies etc and you would not believe the amount of people who have ZERO F**KING CLUE about how google moon/mars software are made and the data errors that occur. It never ceases to amaze me how unbelievably dumb people are, the absolute lack of intelligence and critical thinking when they religiously defend "ufo bases" as proven-beyond-doubt by being shown on pieces of software. I wish it really was a ufo base and then the aliens could come and abduct the dumbest 90% of the population and dump them in the far end of the universe.

Image processing expert Mick West has posted a demo illustrating his idea that the seven dots are the result of mis-applying a sharpening algorithm, plus imposing an incorrect day/night cycle. I think it's pretty convincing. Good work.