Mike Bara feeds his audience a diet of nonsense

Writing of images of the Earth from space, Mike Bara once offered this extraordinarily ignorant explanation:


"[T]he clouds are the highest in the atmosphere, meaning that they are reflecting more light back to the camera and at a faster rate. Since they are returning more light, the clouds are the lightest. The surface areas … are darker, because they are a bit further away from the camera than the clouds and therefore the light has to travel further before it is reflected back. The deep blue oceans are therefore the darkest, because the light has to travel all the way to the ocean floor before it is reflected back to the camera." — Ancient Aliens on the Moon, p.125

Last Saturday, speaking to a packed house at Contact in the Desert, he confirmed for us all that his understanding of optics, albedo, and selenology is dismal. He was talking about the glass towers that he claims were constructed by some alien civilization on the Moon.


17:17 "It seems to correspond with the parts of the Moon that are dark. If you've noticed, the Moon, look at the face of the Moon ... there's light stuff and dark stuff, and the dark stuff seems to have a lot of this glass structure over it and what seems to be happening is light takes a little bit longer to get to the ground and bounce back to the camera. And that's why you see this darkness in these areas."

It hardly needs saying that the dark appearance of the lunar mares by comparison with the bright highlands is caused by the fact that the mares were created by lava flows when the Moon was young and hot, several billion years ago. They are predominantly basalt, whereas the highlands are plagioclase. And there are no glass towers anywhere on the Moon—the artifacts that Hoagland and Bara see are entirely due to scanner contamination. 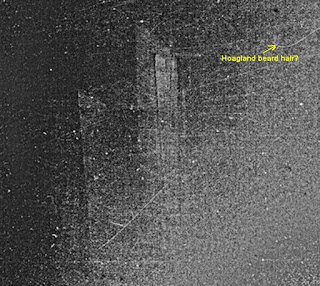 Bara came up with one additional bit of nonsense on this topic. He said (16:30 approx.) that lunar glass is a fine material for construction because it's "as strong as steel or stronger." That's NOT TRUE. Blacic 1985note 1 quotes the young's modulus of lunar glass as ~100 giga-pascals cf. Earth glass 68 because of the extreme dryness of the environment. But steel is way stronger at 224 giga-pascals.

Air conditioned
CitD this year was held in Indian Spings, not at Joshua Tree conference center as in past years. The audience were in the luxury of air conditioning rather than the 110° desert heat of Joshua Tree's outdoor arena. Reviewing the 1h 40min lecture on Youtube, I confess I was a bit surprised. I assumed Bara would use his time to plug his forthcoming book in the "....and Ancient Aliens" series, much as he did at the New Living Expo last month (reviewed on this blog). Instead, it seems as though he just reshuffled Powerpoint slides from many previous speaking engagements and swept through all the familiar territory of NASA deceptions, astronaut prevarications, and condos on the Moon. This was one of his very first slides: 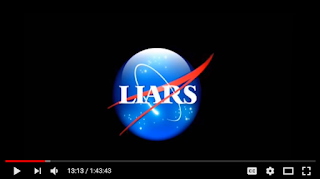 I thought I detected a murmur of assent from the audience. It was probably there even if not really audible—that NASA is an agency of falsehood is a dogma embedded in the UFO community, largely thanks to Richard Hoagland's eloquent but entirely false propaganda. Ten minutes later Bara demonstrated that lying comes naturally by showing this slide, which he maintains depicts "the real colors of the Moon": 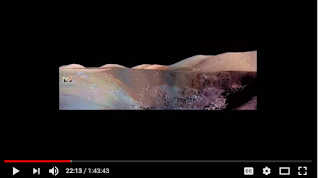 How did he arrive at this travesty? He loaded the Apollo 17 image into Microsoft Office™ Picture Manager and slammed the color saturation control all the way to max. We know this because in January 2013 he performed the exact same trick on the rock in Shorty crater that resembles a skull (reviewed on this blog at the time). At CitD he added that the astronaut at extreme left still showed white, proving that he hadn't introduced color that isn't really there. Nobody from the audience yelled out "No, Mike, you haven't changed the whites but you've fucked up every other color." The audience—and there seemed to be plenty of them—apparently accepted the output of Mike Bara's amateur color manipulation rather than the ~2000 well-exposed still frames from the actual Moon.note 2

He covered the skull-like rock a bit later (29:00 approx), and a minute later put up another of his favorite examples of things that are on the Moon that shouldn't be there. 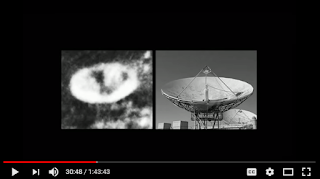 He says the image on the left is a satellite dish on the Moon, but that's NOT TRUE. It's a very low-resolution image of the crater Asada, at 7.3°N, 49.9°E. Seen at approximately 300 times better resolution by the LRO narrow-angle camera, Asada is this: 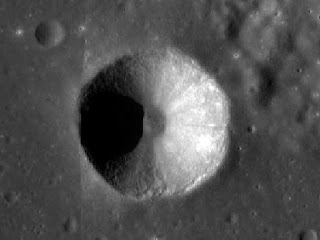 
31:11 "When you look at this picture, the same frame number, versus what's on the NASA site, they are completely different. All the stuff has been whitewashed out."

But that's NOT TRUE. Here's a link to the NASA image, and there's Asada a little below dead center. Another problem for Bara is that, as I proved mathematically six years ago, a selenostationary orbit is impossible because the radius of such an orbit would pass on the Earth side of the L1 libration point. So it's hard to see what a satellite dish might point at.


Facing up to it—or not
Well, given the random nature of this scamper through Mike Bara's historic Powerpoint slides, it was inevitable that we'd get around to the so-called Face on Mars—the feature I prefer to call Owen Mesa after Tobias Owen who first drew attention to it.

Now Bara performed the same trick that he had done in his Books about Mars; namely, ignoring contrary evidence. He showed his audience this sequence: 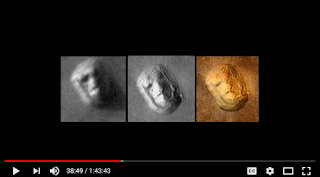 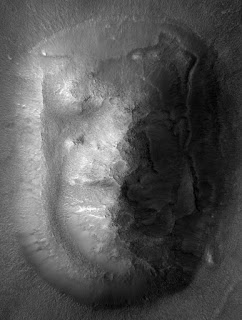 Just as with the so-called "satellite dish," Bara doesn't show this because it's too good and does not enable him to make credible claims that this is an intentionally built feature.

And there was worse to come shortly. Here's what he showed claiming it to be the "right eye". 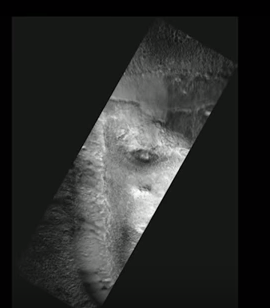 IT'S NOT TRUE!! You only have to glance at the high-res image to see that what's where the right eye would be (roughly) is a very ancient eroded crater that looks nothing like Bara's concocted piece of mendacious crap. Based on a total misunderstanding of dynamic range in photography, Bara asserted "It's not made of rock." That's not true either.

Let there be parrots and air-guitar playing cats
At that point Bara was less than half way through his time. Since the audience hadn't walked out (at least, not as far as I could determine), Bara proceeded to take them through very familiar territory—the D&M pyramid (42:45), the monolith on Phobos (49:00), the parrot (51:15), the cat (58:30), Abydos for God's sake (1:03:05), the Lost book of Enki (1:06:00). He even reiterated his utterly mistaken claim that there must have been a secret breakthrough in transportation speed based on the historical data (1:09:50)—a thesis I debunked a month ago.

What can I say? At least he expressed a little skepticism about the parrot. Small mercies...

[2] On 20th June, responding to a comment on Youtube expressing skepticism, Bara wrote "There are literally hundreds of earth based telescope images showing the colors." He must be thinking of Jose Escamilla's distortions.
at 11:22 AM

Bara's grasp of science is somewhere below that of junior high. It's a shame there were no hecklers but I suppose the audience all paid good money to be fed this rubbish so they're not going to spoil it. I think they were just glad to be out of the heat this time.

I liked the bit at the start where he expressed concerns about sex robots, talking about specific features, before accidentally giving the exact price for one. Browsing much, Mike?

I LOVE the description of Bara's understanding of the reflection of light from large objects. Obviously, he's a greatly misunderstood Suineg... It really helps in my appreciation of his "work"!

However, it seems you are not posting any of my comments any more.

If that's true, would you mind confirming that, please? You have always been such a gentleman. Of course, if I'm banned, there's no point wasting my time writing comments, but it would be nice to know that that is the reason, and not some technical issue. Would you be so kind?

Ah yes, Asada crater, the one clearly visible from Earth and photographed by Japanese and Chinese probes as well as by Apollo!

See teh bottom of my page here http://onebigmonkey.com/itburns/syfy/syfy1.html :)

Apologies to all commenters. There's been a glitch in the moderation process and I haven't even been seeing comments until now. I thought it had gone a bit quiet!

Ha-ha no, the constipation seems to have coincided with blogspot withdrawing support for OpenID. I now have to go looking for comments awaiting moderation instead of getting e-mail notification. A major backward step in user-friendliness.

I've had a couple more thoughts on this one...

Are you sailing a bit close to the wind here, expat?

By stating a few times that Bara's statements are lies, I think you are clearly suggesting / implying / saying that Bara is a liar.

However, if his statements are based on pure ignorance, they are not lies, and he is not a liar. Ignorant idiot, perhaps.

In order for his statements to be lies, he must know them to be untrue. In other words, you might be defaming him, and he might have grounds to sue you!

Further, having in this post so effectively enlightened me, and us all, of (to?) Bara's utter lack of scientific understanding, you also illuminate the quality / intelligence / education of his audience and his followers.

In my experience, there is nothing you can do to help such people. All your efforts to save / protect / warn them are in vain.

So, I am left wondering why you continue to chase Bara's tail. As they say, there's no such thing as bad publicity, and I think in Bara's case, it's absolutely true. No doubt, he laps it up. You are playing into his hands.

The identical external features [what I call 'crater prints'] of the "satellite dish" and Asada crater on shown on page 38 of my review of "Ken's Moon" at http://www.jamesoberg.com/kens-moon-rkj-final.pdf when I compare two images, after stretching to produce the same direct overhead view [which distorts the interior of the crater because it's deep and viewed obliquely from different angles in the two photos] and you can see that every external surrounding crater and rock is in identical locations.

2%--fair point, I changed the title. Don't wanna be sued.

It’s a face, a real life megastructure created by extraterrestrials. Deal with it. I’ve invaded Cydonia enough times in X-COM (the Microprose original, not the Firaxis NUCOM) to know this. Sorry, I hadn’t checked your blog in well over half a year and was somewhat surprised the face keeps getting airtime. Also, Bara seems like he’s getting up there in age.