How to write an instant book

Do we really need another book about the assassination of JFK? Mike Bara and his publisher, David Hatcher Childress, seem to think so despite the hundreds of such books already on the shelves, and mostly by far better authors and publishers. You might think that the release of thousands of once classified documents on the tragedy over the last year would provide enough new material to justify JFK Assassination Book #4001, but the 18,731 documents released a week ago came too late for inclusion and Bara makes very scant use of this vast resource (53,604 documents since last July.)

About a week ago, Bara delivered a 1 hour 40 minute Powerpoint version of his forthcoming book Ancient Aliens and JFK to an audience at the New Living Expo. Approximately the first third seems to be an absolutely standard Kennedy biography—another example of what this blog has called "Ctrl-C/Ctrl-V scholarship." Another long section reviews the pictorial evidence from Dealey Plaza: The Zapruder film, the Muchmore film, the Orville Mix film, the Mary Moorman still-frame. Bara thinks Dallas police officer Tippit is "badge man" in the latter photograph, but so do other Warren Commission truthers. No sign of anything original here. 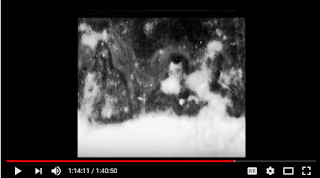 Bara makes much, as he did in his previous book, of Kennedy's surprising announcement, in 1963, that he favored a joint US/USSR expedition to the Moon, replacing the rivalry then in place and the basis of "The Space Race." He formalized this idea in a speech to the United Nations on 20th September. Bara dramatizes the moment by saying "Two months later, Kennedy was dead" as if the connection between the two events was obvious. Well, it isn't—you might with equal logic say "On November 21st, Kennedy had cornflakes for breakfast. A day later, he was dead."

Supposing there were a connection, who might that implicate in a theoretical plot to whack Kennedy? The CIA is the likely answer, since there is documentary evidence (some of which Bara includes) that the Agency was implacably opposed to sharing America's space secrets with the Sovs. But Bara does not take that line. Instead he follows Jim Marrs and at least 11 other authors in fingering Lyndon Johnson as the likely culprit. In the context of Bara's argument, this doesn't really make much sense. As is well-known, Johnson and his buddy Albert Thomas were gung-ho on the Apollo program and passionately gung-ho on keeping NASA in Houston. Those interests were not particularly threatened by JFK's desire to get suddenly cuddly with Khruschev.

Bara's "evidence" is notably weak. LBJ didn't much like the Kennedys—yes, OK, we knew that—and had enough influence in Texas to have created a conspiracy. Bara then presents the following image as if it's a deus ex machina: 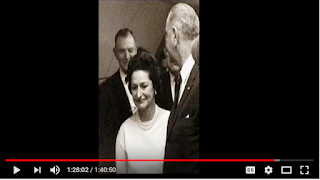 The image shows the Johnsons during the swearing-in ceremony aboard Air Force One at Love Field. Albert Thomas is in the background, and Bara claims that he is winking as LBJ smiles in his direction. If people can be accused of high crimes and misdemeanors on the basis of such flimsy evidence, I guess we'd all better watch our behavior.note 1

Aliens? What aliens?
Considering the title of this book, there's not much material on aliens in Bara's presentation. He asserts, as he did in Hidden Agenda, that Kennedy knew the technology of the Anunnaki was on the Moon and Apollo was his personal mission to retrieve it for reverse engineering back on Earth. This idea seemed totally screwy when he wrote it in the previous book—it seems self-evidently ridiculous now. Last year my questions were "How did he know this?", "What was brought back?", "Where is it now?", and "What benefits did we derive from it?" Now I add the question "How does that jive with the proposal to go to the Moon along with the Sovs?" Bara did not answer any of these questions in his Powerpointery, and I'll be perusing the book when it appears in just a few weeks, looking for anything like answers. I'll report back at that time.

So on the basis of one highy improbable and self-contradictory speculation about what JFK knew in 1961, Bara and Childress think it's OK to title this book as it is. Shamelessly cashing in on the popularity of a cable TV series—I think that's very, very tacky.

Update:
The book is now published. My point by point critique is here.

Watching the first couple of minutes of Bara's video I hear the same tired old "card carrying member blah blah" intro and then he launches straight into telling everyone he was on telly, before downplaying it (rather than downplaying it by, you know, not mentioning it in the first place). Utter cringe, like watching fictional misfit David Brent but embarrassing because Bara really is that insecure idiot.

The more important point, Patrick, which you seem to take for granted, is that President Kennedy and General Secretary Khrushchev were making peace by planning a joint mission to Earth's Moon. Or do you dissent from that view, too? I personally, wonder if they actually were or not?

@Orbs Whisperer: I think both players were doing what was politically expedient. Kennedy's overtures could have been genuine, or they could have been a calculated gamble knowing that the USSR's political machine would never tolerate it but at least he could turn to his home audience and say "See, I tried".

It's also worth remembering that the US's lunar ambitions pre-dated Kennedy by some distance, and research into a lunar landing was already under way long before his famous speech. What Kennedy did was set a deadline and commit the funds that would make it happen, all being well, on his watch.

What definitely didn't happen is the bullshit version Bara has concocted to dupe money out of the gullible.

Theadora: I suspect "Assistant Nikki" is an imp of yours. Since I'm not sure, you're not under a ban yet, but take this as another warning.

To see what I mean by "comment-flooding", try this.

Thanks for posting the link, Patrick. I did some research after asking you my question above. Hoagland therein asserts that Democrats, Republicans, and the Press, were opposed to Kennedy's proposal for a joint US/Soviet mission to the Moon, and that Khrushchev decided to accept, after a failed unilateral attempt by the Soviets. A year after Kennedy was offed, Khrushchev was 86'd.

Yes, the failed unilateral attempt was not at the Moon but (according to Hoagland) Mars.

There's a problem with that story. Hoagland says the failure occurred on 11th November 1963. The USSR was certainly having Mars failures in that era, but none on that date.

So, as usual, Hoagland is adrift. But there's no doubt Khruschev did change his mind, for whatever reason.

Apologies to Hoagland. There was in fact a Soviet failure on 11th November. It was designated Cosmos 21, a.k.a. 3MV-1 No.1. Hoagland has called it (Dark Mission, p.171) "Mars-bound" but it was more likely a prototype of the Venera series. But anyway, RCH was not wrong and I'm happy to make this correction.

I'm pretty sure Mike just copied the beginning of one of the Transformer's movies. The one with the Dino-bots I think....

I find it curious that Hoagland jumps to the conclusion that the secret mission you describe was headed to Mars, when the others in that series were publicized as going to Venus. Also, in the interview of Hoagland by Paola Harris, he states that Kennedy knew what was on the Moon, and that's why he wanted the Soviets on board, in order to share for the sake of World peace. Hoagland doesn't qualify that view. Furthermore, Patrick, you let that slip by without criticism.