Here's what journalists do. They start with a blank notebook page and fill it with facts. They derive these facts from reading documents, looking around, and from various types of interview, asking the classic questions who-what-where-when-why-how and hopefully many others, if they can keep the interviewee's attention for long enough. There's nothing wrong with a journalist having a special interest—on the contrary, it's a benefit, since then that person has, or should have, the wisdom and insight to get facts that others might not. James Fallows, for example, contributes more than the average journalist on Foreign Affairs just because of his long experience in that field, and there are many more examples.

In my opinion, Kerry Cassidy is not a journalist but a propagandist. She does not start with a blank notebook page. In commenting on modern tragedies involving death, her notebook page is already headed False Flag. She did it with the World Trade Center, she did it with the Charlie Hebdo massacre, and she has done it with every school and concert shooting since Sandy Hook. Her technique is the reverse of journalism in the sense that she starts with that assumption and looks exclusively for interviewees who support that prejudice.

In Ole Dammegard and James Fetzer, she found her ideal pair. Both of them absolutely go along with her paranoid theories and will sit and talk conspiracy with her for as long as she likes. She ran a long video interview with Fetzer—who is the founder of Scholars for 9/11 Truth and editor of  Assassination Science—on 15th March this year. That piece specifically addressed the massacre at Marjory Stoneman Douglas high school in Parkland, Florida, speculating that the entire event was staged and that there were no actual victims. On 29th March Fetzer was back in the interviewee seat along with Dammergard, who she introduced as "an internationally recognized expert on assassinations, false flags and covert activities." He is also editor of lightonconspiracies.com. The interview headline was False Flags: Diagnosing, Explaining and Predicting examples from Sandy Hook, the Boston bombing, Orlando, Las Vegas, Parkland and more.

Unfortunately for Kerry, and as I commented at the time, Youtube received complaints from people who did not take kindly to allegations that victims were nothing but crisis actors, and pulled the video. STRIKE ONE. Now the earlier interview has suffered the same fate. STRIKE TWO. 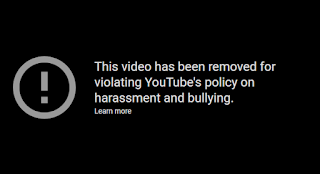 Yesterday Kerry appeared on her own website (I notice that she has stopped referring to her "TV Network") in a passionate and at one moment tearful denunciation of Youtube and an appeal for support. A few excerpts:


"They are trying to shut me down altogether... YouTube has obviously been infiltrated by the Illuminati and Black Magicians.... I'm a journalist.. I do hope that I'm able to manage to sue Youtube... They're afraid of me... One more strike and I'm OUT, as they say. That means they'll delete the entire library of 750, or whatever it is, interviews that I have... " 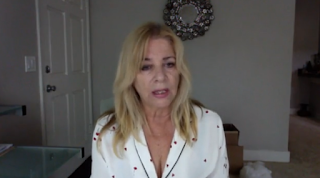 This was the text of the complaint about the March 15th interview:

I'm not in favor of shutting Kerry down entirely, but if she wants to claim the privileges of a journalist she's going to have to learn to act like one.

Update May 17th
Kerry is now looking for a pro bono lawyer to sue Youtube for "an illegal 3-strikes LAW on their youtube website as well as illegal targeting by Youtube/Google in conjunction with advertisers against our rights of free speech and freedom of the press of independent broadcast journalists and their channels."

So there she goes again, claiming to be a broadcast journalist. I think she ought to look up the definitions of both those words.
at 10:25 AM

She may have idiotic points of view and opinions...but nonetheless...points of view and opinions. There are good therapies for that in the psychological arena....but she has a point. If we allow and or find it necessary and or cheer at phenomenons like censoring and or discrediting people because one can not stand the fact that others might have an opinion as well, however ridiculous or off the grid...then call it for what it really is...fascism and nothing else. One can argue until one sees blue in the face...but if one cheers and adheres to the regulation of thought and opinion....again..one enters the arena of fascism. And if one needs the T-shirt version....If you are easily offended...now would be a good time to bugger off. And as for the elephant in the room...Nobody gave Google..Youtube etc etc...the legal right to play God, Judge, Jury and Executioner.

Everyone should blindly trust those in charge. There should be no one looking into whatever has happened.

No, George. Qualified journalists should investigate diligently. As they do. Kerry Cassidy doesn't investigate, she makes assumptions.

I fully agree....but in some cases when they [ diligent investigative journalist's ] do so...they not always end up being praised for this qualification. Remember for instance Liz MacKean, a high profile BBC journalist.

Oh and a list of names with truly diligent investigative journalist's could be made the length of a roll of toiletpaper...not ending up being praised for their quality work .

For the benefit of those who may not know, Liz was the primary exposer of the paedophile activities of Jimmy Savile, as a reporter on Newsnight. However the BBC never allowed her exposé on the air.

I would point out that she continued to do fine work until her untimely death last year.

Nothing shows how much you value the work of a professional lawyer quite like asking them to work for you for free to try and get you lots of money.

Astronomers first discovered the asteroid in question, which has the succinct name (413107) 2015 BZ509 (or Bee-Zed for short), back in 2015 using the Panoramic Survey Telescope and Rapid Response System (Pan-STARRS). Though the initial discovery team noticed Bee-Zed had a very peculiar, yet stable orbit — it shares a nearly perfect one-to-one resonance with Jupiter, but travels in the opposite direction — they were unable to explain why the asteroid has this ‘retrograde’ motion.

“How the asteroid came to move in this way while sharing Jupiter’s orbit has until now been a mystery,” said Fathi Namouni, the study’s lead author, in a press release. “If 2015 BZ509 were a native of our system, it should have had the same original direction as all of the other planets and asteroids, inherited from the cloud of gas and dust that formed them.” "

Mike the Cartman and the Hoagie are going to have a field-day with this one :-) :-)

There's nothing in the first amendment that mentions "qualified journalist". It mentions the word "press", but that meant (at the time) anyone with access to a printing press. The founders didn't say anything about the education, intelligence, or integrity of such people. Some (certainly Jefferson) saw them as partisan hacks who were never the less necessary for the functioning of a healthy republic.

None of this means that Cassidy isn't bat guano crazy, she certainly is. What it does mean is that we have to be careful about excusing the silencing of someone just because we disagree with them. I'm not nearly as trusting as some here in the wisdom of the folks currently running big-tech. Some of these folks (cough-Zuckerberg-cough) are actually sociopaths.