Today this message appeared on The Project Camelot page:


"I have been banned from Live Broadcasting on my main youtube channel because of a recent interview regarding FALSE FLAGS WORLDWIDE with Ole Dammegard and Dr. James Fetzer!  This is politically motivated and violates my rights as a journalist to freedom of the press and free speech!!  Please support our work.  My income has been severely affected by this ban!"

Cassidy went on to accuse "The deep totalitarian New World Order" of being behind the ban. I'm not sure what she means by that. As we know all too well, Youtube is now Google, an American multinational technology company based in Mountain View. Google may wish it could achieve world domination, but it's certainly not there yet.

Well, look, I'm not much in favor of gagging people with weird opinions, but I don't have much sympathy with Kerry Cassidy. She claims the privileges of a journalist without being willing to submit to the discipline of the profession. She never cross-checks rumors that come her way, she routinely expounds outrageous opinions as if they were facts, and as far as I know she has never responded coherently to criticism, still less withdrawn a proposition when she was informed that it was mendacious. In my opinion she's not a journalist at all, just a narcissistic commentator with some superficial command of internet communications.

I tried to listen to the Dammegard/Fetzer interview but I couldn't stand it. It was just standard Kerry Cassidy paranoia turned up a few notches. To her, all such events as school shootings and random terrorist-style attacks have to be false flags. She pays absolutely no attention to the fact that the sinister behind-the-scenes manipulators of these things never seem to see the supposed benefits from their activities. Prime examples would be: No confiscation of privately-held firearms despite numerous school and concert shootings; No deportation of Muslims from France despite at least two horrific mass murders in Paris.note 1

Cassidy did not detail exactly what the complaint against her alleges, but I surmise that it would have been similar to a 3rd April allegation of Hateful or abusive content, this one filed against a previous interview with James Fetzer, with very similar content. That complaint alleged as follows: 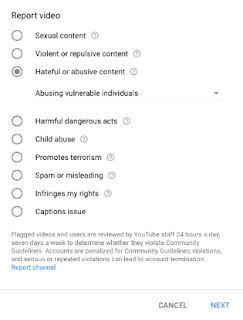 As it happens, that one did not succeed, and the video is still up. Kerry Cassidy can scream all she wants about totalitarian forces abrogating her rights, but the simple fact is that Youtube has announced Terms of Service and reserves the right to ban, partly or wholly, any violators. A vile video posted by Alex Jones has recently suffered the same fate.note 2 If Cassidy is truly suffering financially from the ban I can only suggest she gets a job retrieving shopping carts at her local supermarket, and quits boring us all with interminable paranoid rants.

This just in:
Three of the Sandy Hook parents have filed a $1m lawsuit against Alex Jones. BRAVO!!!!

Thanks to Stuart Robbins for information


"These strikes, warnings, and punishments, then, are ultimately motivated by YouTube’s desire to reassure the advertisers that make them money. That reality, however, seems lost on Jones and InfoWars, who are spinning their reprimand as yet another conspiracy. CNN says it referred three other InfoWars videos to YouTube for review, which Jones has characterized as CNN “calling to have a competing news organization shut down,” and described as part of a “globalist conspiracy.” That framing supports InfoWars’ broader thesis that it is uncovering truths being repressed by the “mainstream media,” rather than simply slandering teenagers who witnessed a mass murder as a way to sell overpriced dietary supplements."

You don't seem to much mind gagging Theo with Dick attacks and in case it's been awhile since you've swiped shopping carts for the bounty, Safeway refuses to pay ransom, nowadays.

If people want a platform on which to voice their views all they need to do is get some web hosting, just like I did. If advertisers think they are worth backing, they will back them.

If they want a free ride on someone else's business model they have to put up with the conditions that business model imposes. If those conditions include "don't be a piece of garbage exploiting other people's stupidity at the expense of the misfortune of others", don't be surprised if you're asked to go elsewhere.

The feigned outrage of these hypocrites is not the loss of free speech, it's the loss of the income stream they get without making any real effort.

"Three of the Sandy Hook parents have filed a $1m lawsuit against Alex Jones. BRAVO!!!!"

Three real parents or three of the many crisis actors involved?
Let me make a prediction...this lawsuit will go nowhere and finally end up in a shredder. Wait and see.

Little Noah and little Jesse are ACTUALLY DEAD. For five years those and the other parents have had to deal not only with that horror but also with the fact that cruel fantasists like you have been mocking their grief. Think about that.

I had a run in with Alex J on C2C once, he was claiming that the Wal Mart distribution center in Cullman AL was a secret detention facility. I had visited and toured the place, his pix were not of that place, and he simply makes money for nothing on the backs of paranoiacs....Sandy Hook was not quite as the media makes out, for example the man running away in camoflage that the news chopper caught on film, the ME's odd behavior, and some other things are not quite right, BUT! The kids were killed by the shooter, and are dead. Jones should have asked questions about the State's response, and not attacked the grieving parents. I suspect the State of Connecticut was up to something in this incident, but crisis actors, no...

"Little Noah and little Jesse are ACTUALLY DEAD. For five years those and the other parents have had to deal not only with that horror but also with the fact that cruel fantasists like you have been mocking their grief. Think about that."

Sorry darling but you are jumping faster on the bandwagon then your neighbor can say 'wag the the dog'
Having said that...
First of all without being cruel..I simply asked a question which can be answered very easily...namely no..these parents in question did loose their children as a result of a shooting in a school. Always have a coffee before responding :-) otherwise one might overlook a leading question...which really might be considered cruel :-)

Secondly..and here it comes..it seems to me that you...as a stated...jumped on this bandwagon to soon without doing the investigative groundwork.
Why....and that is the reason why I can make a pretty accurate prediction that the lawsuits will end up in a shredder...BECAUSE..these kids are ACTUALLY DEAD....and mr Jones NEVER..claimed that these children aren't dead.
So..as the saying goes...Habeas corpus!!! In this case..if you can actually proof that mr Jones said or wrote something to the effect that these kids, emotionally mentioned by you, did not die...I will stand corrected and walk away in shame.
On the other hand however...if you fail to deliver and I will use your words...you must be the one being a cruel fantasist mocking simple investigative research and principles of law.

So?? And?? That really doesn't answer the question I asked you does it given the fact that the topic at hand is a very specific lawsuit? So the question remains the same and for clarity...unanswered by you. So..just leave the dog alone and stay on topic if you please.
For another form of clarity...No, I am in no way defending the mindsets of this person going by the name Jones.

Anonymous wrote: "mr Jones NEVER..claimed that these children aren't dead.
So..as the saying goes...Habeas corpus!!! In this case..if you can actually proof that mr Jones said or wrote something to the effect that these kids, emotionally mentioned by you, did not die...I will stand corrected and walk away in shame."

“Yeah, so, Sandy Hook is a synthetic completely fake with actors, in my view, manufactured. I couldn’t believe it at first. I knew they had actors there, clearly, but I thought they killed some real kids. And it just shows how bold they are, that they clearly used actors. I mean they even ended up using photos of kids killed in mass shootings here in a fake mass shooting in Turkey — so yeah, or Pakistan. The sky is now the limit. I appreciate your call.”

“The general public doesn’t know the school was actually closed the year before,” he said. “They don’t know they had kids going in and out of the building as a photo opp.” And, Jones said on that show: “But it took me about a year with Sandy Hook to come to grips with the fact that the whole thing was fake. I mean, I couldn’t believe it. I knew they jumped on it, used the crisis, hyped it up. But then I did deep research — and my gosh, it just pretty much didn’t happen.”

He called the kids actors, and the whole episode fake - that it didn't happen. The implication of his words is that no children, or anyone else, died.

Thanks for the research, Trekker.

Anonymous, watch this too, from today:

@ reactors thus far [no pun intended ]
All good and fine and again I am by no means defending anyone!! But I assume that every intelligent person can read
Therefore
The prediction stands as previously mentioned because..and this may come as a surprise...you [the aforementioned reactors] are really not the judge and/or jury no matter what opinions on might have on the matter.

Prediction: the lawsuits will end up in a shredder...because..these kids are actually dead....and mr Jones never..claimed that these children aren't dead.

We will simply have to wait and see haven't we?

Anon: Either you're ga-ga or you can't read. Trekker already cited the essential quotes that make you a liar.

"Anon: Either you're ga-ga or you can't read. Trekker already cited the essential quotes that make you a liar."

Oh come on...you really can do better then this! A very unintelligent statement from a person who normally sounds very intelligent given most of the content of your blog.
Since when is a person who makes a prediction by default a liar when it does not compute? I do not base my argument on all the previous rhetoric quotes or otherwise. Therefore and again, the prediction still stands and we will simply have to wait and see if lawsuit meets shredder or not. And as I quoted earlier...if this lawsuit does not end up in the bin and the person who goes by the name Jones has to cough up a million..I will stand corrected and walk away in shame.

Anon: It's not your prediction that makes you a liar, it's your assertion that Jones never said those poor, poor kids didn't die.

"Anon: It's not your prediction that makes you a liar, it's your assertion that Jones never said those poor, poor kids didn't die."

It's not just that they didn't DIE, it's his claim that they never even existed in the first place - that they were just actors, that's so insulting and hurtful to the parents.