Since I won't be reporting from AM*'s faceboo page any more, I leave him with a (possibly not comprehensive) list of his errors, both aerospatial and political.

1. AS15-P-9625 shows a crashed spacecraft on the far side of the Moon. Reference
2. The above frame is from Apollo 12 Magazine P (It's from the Apollo 15 pan cam)
3. AS17-M-2444 shows hangers [sic] in Mare Imbrium. Reference
4. The above frame is from Lunar Orbiter (It's from the Apollo 17 mapping cam)
5. Mis-labeling of seven craters in Mare Imbriumnote 1
6. There's more than one space station in Earth orbit (the other one is part of the Secret Space Program)
7. The Mars opposition of April 2014 will cause major earthquakes
8. "Planetary gravitational entanglement"  will cause more giant quakes in June 2015
9. Total misunderstanding of the Mono Lake extremophile GFAJ-1
10. NASA doesn't show images of Ukert crater
11. The Apollo astronauts were not aware of the DSE voice recordings
12. There's a 1967 edition of The Brookings Report (he claims to have a copy of this but he's completely unable to come up with any quotes from it)
13. AS10-28-3988 shows a 166-mile wide space station in lunar orbit (It's a 2ft piece of mylar insulation)
14. AS16-109-17761 shows a UFO ("Treasure of the Abyss") in lunar orbit (It's a scanning fault, only on some versions of this frame)
15. APOD 5 April 2004 shows a "Martian artifact" (it's the mark made by the Opportunity rover Rock Abrasion Tool)
16. AS17-M-2366 shows "Big Ben on the Moon" (It's scanner fluff. In 2367 it's migrated way off to the right)
17. Material was edited out of the Apollo 10 DSE tapes to obfuscate the "Music on the Moon" report
18. The Chinese Chang'e lunar orbiter photographed a lunar base
19. Frames from Apollo 16 film show a "Moon racer" following the Command Module (almost certainly an internal reflection)
20. Part of an Apollo 17 film shows a UFO observing undocking of the LM from the CM
21. After Apollo 11, NASA was "frightened off the Moon" (and yet landed five more missions?)
22. Frames from the Zapruder film were deliberately altered to obfuscate the real assassin
23. Kim Philby was homosexual (He was married four times, had five children and plenty of het sex on the side)
24. Andreas Lubitz, co-pilot of Germanwings 9525, was a convert to Islam
25. Hillary Clinton murdered JFK Jnr. by tampering with the avionics of his plane
26. Jupiter and Saturn used to be stars
27. "Cairo" means Mars (No,  it means The Conqueror. A word for Egypt is Mas'r, which has nothing to do with the Red Planet)
28. Thermonuclear war on Mars (he believes John Brandenburg)

Update 13 May:
"Trekker" makes a good point in comments about error #1. Using the line tool in the ACT-REACT map, she shows that this is a depression rather than a dune or a spaceship. So I was fooled by the lighting, just not as badly as was AM*. 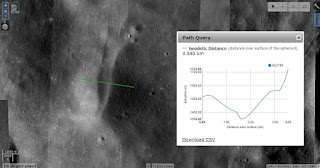 I can never understand why the feature in #1 (the crashed alien ship) looks like a raised feature in the Apollo 15 image, even at the highest level of zoom, whereas in the LRO image, it becomes a depression when moving from the 64m/pixel zoom to the 32m/pixel and lower.

The lighting is very different as between the 64m/pixel and 32m/pixel LROC images. It's notoriously difficult to tell the difference between concave and convex planetary features. Craters can easily look like domes --Hoagland was fooled by this phenomenon more than once.

OK, true enough about the difficulties in distinguishing domes from craters.

The reason it puzzles me is because using the line tool on the LRO image, and drawing a cross section at either 64/m per pixel or at 32m/pixel or larger, it shows a concave, not convex profile.

I don't know how to attach a screengrab here, so I'll send it to you on a FB message, to show what I mean.