Review of Mike Bara on Coast to Coast AM, 28 Oct

Mike Bara's gratuitous insult directed at Stuart Robbins at the start of hour 4 ("He may be a scientist but he sucks at it") will come back to bite him, as Stuart will now get a guest spot on C2C and quite possibly a chance to debate Mike live. I can hardly wait.

Oh, Ziggy, Where Art Thou?
Even though the main topic was Mars, Mike couldn't resist attempting to justify his irresponsible promotion of the Daedalus Ziggurat on the Moon. He actually acknowledged that Stuart Robbins and I had done his research for him, but denied he ever doubted that Terry James (kksamurai) had created the original image. Good thing this blog keeps an archive, and I can therefore remind you that on the Inception Radio Network, Friday June 14th this year, he did indeed say that. And he did write on his blog that he "enhanced" the image before passing it to Hoagland, who apparently "enhanced" it some more. The image that finally got posted to the Coast to Coast web site was named AS11-38-5564-Mike-oirginal-enhanced3.jpg.

Mike's new position on the wiggy ziggy is set out in incredible detail in his new book, now copied to his blog. I can't imagine even his greatest fans wading through all that garbage, and Mike needs to learn the difference between "forward" and "foreword."

Caught by Logic
As he droned on through the usual accusations of sinister NASA cover-ups, the logical problem that this blog has often mentioned became very clear. Mike and his ilk really have painted themselves into a corner. They come up with these triumphant toldyas all the time -- the sneaker on Mars (titter), the satellite dishes on the Moon, bla bla bla -- but since their sole source of this imagery is NASA itself, they force themselves to claim, simultaneously, that NASA is covering things up and also that NASA photography reveals things that ought not to be there.

So we have the spectacle of Mike claiming that one Apollo 11 frame, AS11-38-5564, contains incriminating evidence that NASA covered up the ziggy but failed to cover up a crane, a spaceship, a gun emplacement, a jack, a flying saucer, a beach house and a human head (but of course  there's no such thing as pareidolia.) Last night he referred to a feature on Mars which JPL scientists themselves have nicknamed the "Inca City." Are they covering it up? No, of course not, they're even jokily comparing it to a Peruvian archaeological site. Mike, of course, wants to have it both ways. 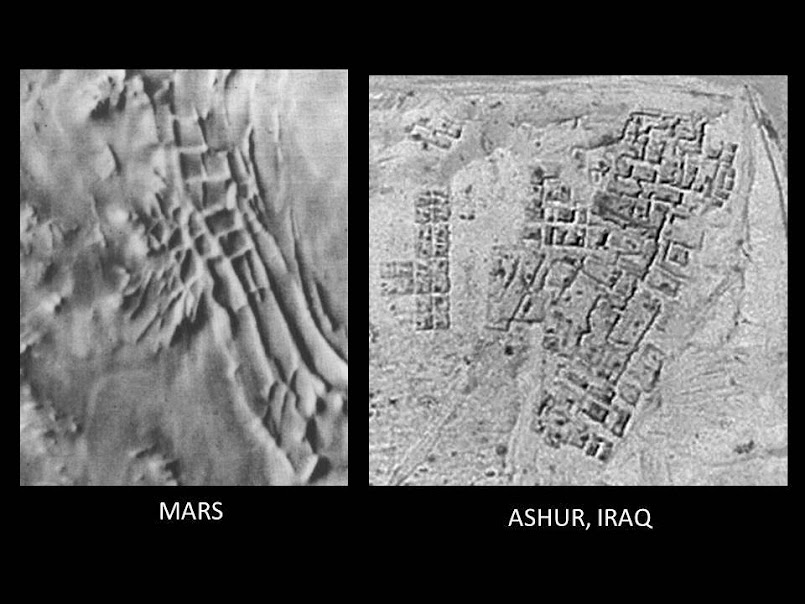 Mike last night talked himself right into another logical trap, when describing the "tidal model" of Mars proposed by Richard Hoaglandnote 1, combined with Tom Van Flandern's hypothesis that Mars was once the moon of a larger planet that exploded. Neither of these is a daft idea per se, but what Mike doesn't get is that they don't work well together. In fact, they're mutually exclusive. 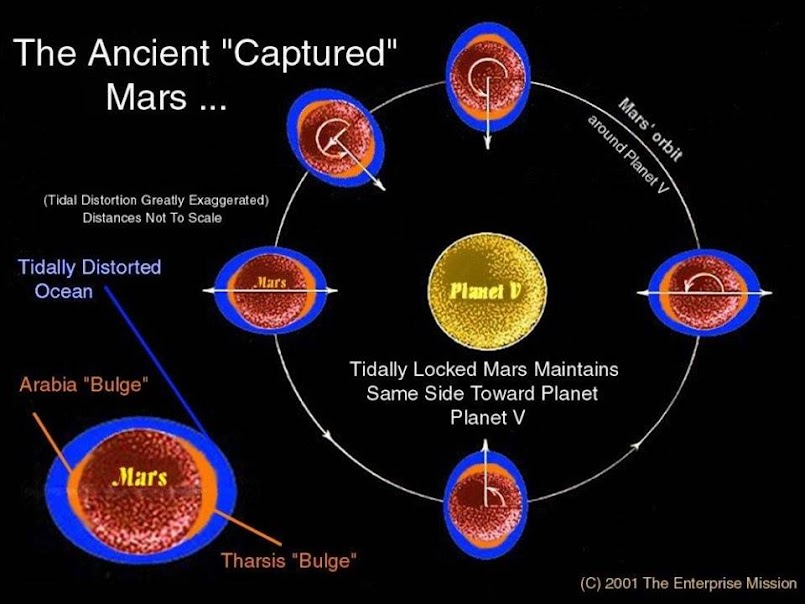 There are the two claimed tidal bulges, Arabia at the 60° longitude and Tharsis at 240°. They define Mars's orientation in relation to the claimed parent planet. And it's tidally locked, too, so Tharsis is always on the planet side. But then, what happens when the parent planet explodes? Van Flandern observes, correctly, that one hemisphere of Mars is much more heavily cratered than the other. So logically that would be on the Tharsis side, the equatorial west.

Except it isn't. It's the entire Southern hemisphere that got preferentially splatted. The hemisphere that was not pointing at the planet when the biggie went down.note 2 Oops...

"Wait... you mean planets can explode?"
Kudos to George Noory, for once, for asking Mike a very direct question -- Why would NASA want to cover up evidence? -- and refusing to accept the tired old Brookings Report as the answer. It had Mike scrambling a bit before he came up with what he thought was a scary scenario. A NASA press conference at which they announce that, yes, they have definite evidence that the parent planet of Mars once exploded and wiped out a civilizationnote 3, all other life, several oceans and an entire atmosphere. Mike seemed to think there would be panic in the streets. Is it me, or is that an incredibly weak argument?


Sexy FB messaging
Mike reiterated his accusation that his critics (and I assume he includes me) have been sexually harassing his FBgfs. I take exception to that. I say this: Mike Bara, put up or shut up. James Concannon has posted a specific and detailed example of reverse sexual harassment directed at him. Let's see a specific example of a sexual message from any of us. If you can't come up with one, stop saying that. And apologize.

[1] In the course of the whole four hours, Mike managed to avoid mentioning Hoagland even once. Considering how much of his new book is recycled Hoagland material, I'd say that's remarkably ungentlemanly of him. But then, we know Mike is no gentleman even though he may spend plenty of time in "gentlemen's clubs" in Las Vegas.

[2] Arabia Terra and Tharsis Montes are in fact both in the Northern hemisphere, just to make things  worse for the theory. Tharsis at about 2°N, Arabia at 20°N.

I've been falling asleep to C2C for many years, and have never heard a guest repeatedly mention his critics the way Mike did last night. It sounds like you and a few others are living rent-free inside his head and apparently not helping out with utilities or even doing the dishes once in awhile. Just hope you don't get too cold this winter, because that thin skin of his won't provide much insulation.

Just to verify something here, Expat.

Did Bara argue for Tharsis Montes or just the Tharsis bulge or area? The bulge is "running from the northern flanks of Alba Mons (about 55°N) to the southern base of the Thaumasia highlands (about 43°S). Depending on how the region is defined".

As for Arabia, while it seems more confined to 20°N, this in itself does not influence the theory (I think) considering at least Hoagland stated in his "paper" that the tidal influence works "in concert with pre-existing internal mantle upwellings". These upwellings are not present anywhere at 60° longitude aside from the region at 20°N. Quite shallow overall.

And by the way, I just looked it up but RCH does seem to address your remark that "it's the entire Southern hemisphere that got preferentially splatted". It even reads: "the authors acknowledge that this presents some serious problems for this entire model". But they solve it by introducing a "spin axis tilt" relative to Planet V during the cataclysm involving also a Planet K.

So there. :) For compleness sake.

Sincere thanks, Dee. If that Tidal Model web page wasn't such an almighty screw-up I might have found that myself.

Wouldn't it be nice of either of those rascals Hoagland & Bara weren't so arrogant and could discuss these questions rationally?

Sara Shanae has posted to Facebook an eloquent defense of blackface, and of the white kids who dressed up as Trayvon Martin and George Zimmerman for Halloween.

She says if we're outraged about that, we should blame the news media for making such a big deal of Trayvon's killing in the first place.

On a brighter note, I see that Sara has reverted to her natural hair color. Could this signal that she has become more accepting of herself as a Latina?

Mike Bara's Amazon ranking is all the vindication he needs!

Well, that, and the hot women who are willing to be photographed with him.

Very sad indeed. It's the C2C effect I'm sure and all the related, often carefully timed fuzz on blogs and ad campaigns in the wake of that show. Good news is that in one or two days (or even hours!) it will drop from the list again. But the "bestseller" status can now be quoted in other campaigns nevertheless.

Does C2C get paid anything by the guests to be on the air? They should charge something since it's basically mindless promotion disguised as interview (like so many professional blogs these days are doing too). Win-win! Only critical thought loses out.

Did he say anything about you, Expat, pre-empting his big announcement? Did he actually make the announcement?

The payola scandal in the music industry was a very big deal back in 1959. Premiere Radio wouldn't want to risk a replay of that.

Trekker: That was funny. He had promised the Fuckbook disciples that he'd announce in the first hour, but he didn't. In the end, George Noory actually had to remind him about it. That was hour 4. No, he didn't moan about my pre-empt.

Well, good news is that Bara dropped to #17 in Amazon's (hourly?) Best Sellers in Astronomy & Space Science, still remaining somewhere below Erich von Däniken. Hard to believe Chariots of the Gods (1968!) is still going that strong. Perhaps it says everything one needs to know about recycled pseudo-science: it never stops spinning itself into existence since it functions as self-tantalizing entertainment-as-belief more than actual reference about something.

I'm not sure I can listen to this tadger Bara anymore. It's the same old claptrap that both he and Hoagland have been blethering on about for years. Brookings, airbrushing NASA employees, Ken Johnson, yada yada bloody yada.

But to go on air and claim his Farcebook girlfriends have been sexually harassed is an absolute outrage. Especially when directed at such an honourable man as James Concannon. Makes my blood boil. Bara is such a deplorable man.

I really can't wait for Dr Robbins to get airtime. But I doubt Mikey boy would have the gonads to debate him live. Oh man I hope I'm wrong. I hope Bara goes 1v1 with Robbins. I'd pay a subscription just to hear that.

I hope Lady Karma has finally painted a bead on Mike.

BSB - I will say George has been in contact with me, though the latest is that it wouldn't be until February, "he’s available then after the holidays." We shall see.

Darrow: by the exact same reasoning, Bara is only attacking Stuart because Stuart is speaking the truth.

I also have the book and expect to get a point-by-point review up tomorrow.