You didn't think Mike Bara was going to get this right, did you?

...No, of course you didn't. I'm surprised he's still alive -- you might think he'd make mistakes every time he tries to feed himself.

Today he proudly announced a Picasa gallery which we can all admire -- the 223 figures from his new book, plus the front cover. I have a few comments. Numbers are his frame numbers.

4. I think his numbers are correct. It pains me to see a mixture of kg and miles. Perhaps I'm over-trained. 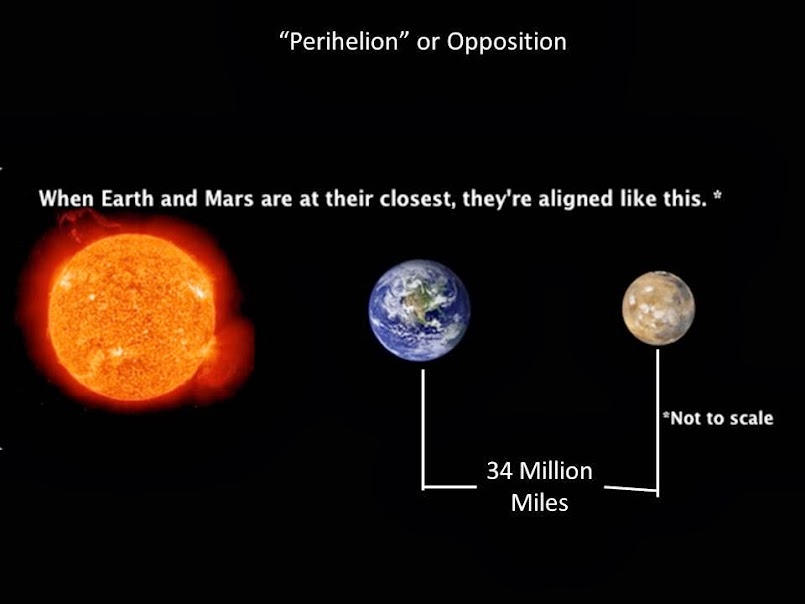 This illustrates opposition, but not perihelion. Perihelion and opposition are totally unrelated. 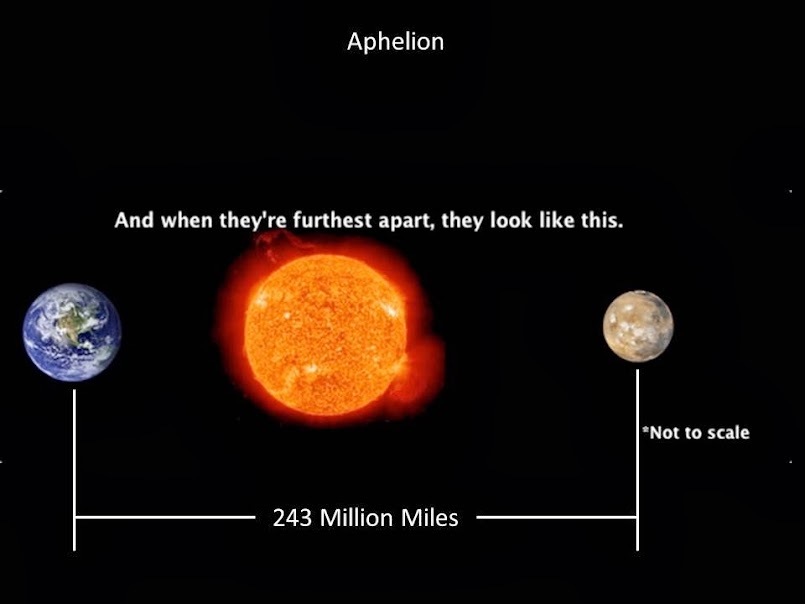 This illutrates conjunction, but not aphelion. Aphelion and conjunction are likewise totally unrelated.

Dr Stuart Robbins has hit his keyboard about this, producing a very informative blog making this terminology clear. Bara's snarky comments to Robbins in the captions to 7, 8, and 9 are so childish they make me reach for the vom-bag.

Let's be perfectly clear about this: If the orbit of Mars were perfectly circular, its  distance from Earth would still be variable from 47 to 236 million miles. Bara is totally wrong.


30. I think I understand the intent of this diagram (stolen from Hoagland,) but lunar gravity is not shown by blue arrows anywhere. I guess it's the arrow labeled 12 micron/s/s but lunar gravity should also be shown on the opposite side. Centripetal acceleration should be the same on both sides. I hope his text makes this a lot clearer.

37. I like this one because it neatly falsifies Bara's contention that large eccentricities are common in the solar system. He takes this as support for the solar fission model, but it isn't true. If Pluto is disregarded, only one planet has eccentricity >0.1.

41. Much of Bara's artwork has copyvio problems, none more than this one. It's ripped off from solstation.com -- a site that clearly states that its data is free for personal use. NOT for commercial use, Mike Bara.

63. Isn't this a perfect example of the pareidolia that Bara says doesn't exist?

79. Nice to see Gil Levín getting some exposure, he deserves it. IT IS TOTALLY UNTRUE that NASA suppressed his findings. What part of "The Labeled Release data has been publicly available in its entirety on a NASA-sponsored web site for 30 years" doesn't Bara get?

82. Incorrect sky color. The best description of the color is "butterscotch."

86. Ridiculous. Just because the discoloring on the Mars rock reminds Bara of lichens, it doesn't mean it actually is lichen. More pareidolia.

101. The gentleman on the left is Jim Martin, Viking Project Manager, not Arden Albee.

124. I hope his text doesn't claim that Neptune's dark spot is at 19.5°. It isn't. It appeared at about 25°S then wandered north before disappearing completely. Then a new one appeared in the Northern hemisphere.

7 and 8! How many times can he get this completely wrong???

Yes, and not only catastrophically wrong but accompanied by childish snark directed at someone who's trying to correct him -- quite politely, considering.

It should be mentioned that the five photos professing to show the spectral reflection of the fact - first advocated by Hoagland - I thoroughly explained in my 59th podcast episode (Fact on Mars, part 1): http://podcast.sjrdesign.net/shownotes_059.php . Search for "99" and you'll get to that section - "Mars Odyssey THEMIS Image from 2003 -- "Pre-Dawn Cydonia.""

Oh, god! How can he claim 'perihelion' occurs when Mars and Earth are at their closest (perigee)?

He actually posts a diagram (no. 10)showing the varying distances of Mars' oppositions It should have been obvious to him, from his own diagram, that not all oppositions occur at perihelion, or even perigee!

Trekker: You're basically right, but Mars doesn't have a perigee because it's not in Earth orbit.

Wow, this stuff was crystal clear to me before Mike got it so fucking wrong. Now suddenly I have to think about it.

When they were together, Hoagland was the puppet master and Bara played the puppet. Now that Hoagie no longer has his hand up Bara's ass, he's forced to think for himself. The result is pure comedy gold.

Lol! You're right about perigee!

Basically what I meant is that conjunction and opposition don't necessarily correspond with perihelion and aphelion, which is what you were pointing out in the first place. His diagram #10 should have made it clear, even to him.

Aphelion and perihelion. The clue is in the "helio", you thick muppet!

Stop pretending you know *anything* about space! I mean, WTF? Did you do *any* research for this... "book"... or did you just make this shit up and then copy all your images off the web and NASA to "lavishly illustrate" it?

You're a laughing stock right across the astronomy community, not one single person supports you.

Why is it that every time I read Bara's responses to Dr. Robbins, I think it's Basil Fawlty trying to explain that the hotel guest isn't really dead?

Well, now we know what Mike Bara was up to, earlier this year, hobnobbing with Maureen Elsberry (of Spacing Out) in places like Rendlesham and Sedona.

Bara and Elsberry are playing reporters on a 4-parter for Animal Planet. The principal in this yawnathon is someone called Derrel Sims.

Mike is going to make a "big announcement" of this when he does his book-plugging stint on Coast to Coast AM tomorrow night. I take some slight pleasure in pre-empting his Big One.

Derril Sims. Ah, proof that you can always sink lower even when your name is already M. Bara.

But Bara might be too much too handle, even for the Amazing Sims. Error below copied from alienhunter site:

"You are browsing the Blog for Mike Bara Archives - Derrel Sims."