Robert Morningstar, the Fordham scholar and frisbee expert, gave us his opinion of James Burke on FooBoo today.


"James Burke, the original "Mad Scientist"? Who cares what he thinks? He rants in mindless twit & twaddle, more of a poet than a scientist and not a very good one (scientist) at that. Opening scene for next show... walking on the shores of the Atlantic near N. Ireland: "Ah, how profound! Here I have a Starfish? There we have a horseshoe crab, direct descendant of the trilobite that lived in the Atdabanian stage of the Early Cambrian era. And here in my hand (cupping hands) is a Nematode, one of the simplest life forms ever known. And there we see an ocean? ... The soup of life... :) Is there a 'connection'??? Ahaa ... Maybe! Stay tuned to find out tonight on "Coniptions"." I really liked his lily & posey-loving poesy, but science ... just a little bit. James Bure [sic] is the original inventor of that bane of modern media -> "InfoTainment," which gave birth to Fox news and CNN "Canned Science"... Hahaha ... Like Global Warming "science."  -> M*"

Burke, as many people know, is not a scientist and has no pretension to be taken as one. His MA (Oxon) is in Middle English, and his reputation is as a historian of science. I don't think he's any good at frisbee at all, but I happen to know he plays a mean game of bridge, if that counts for anything in AM*'s mind. I don't know how Burke himself would react to being called Infotainment, but my personal reaction, as one very familiar with Burke's work, is that it's inappropriate. The portmanteau word was coined to denigrate television news shows that provide way too much soft news and feel-good magazine-style stories. Since Burke was never in the news business in the first place, his contributions to television can hardly be said to trivialize news.

Morningstar's jealous outburst was in response to the posting on his FB timeline of two of Burke's documentaries from the 70s—"The Men Who Walked on the Moon" and "The Other Side of the Moon." The posting—initially from Jerrye Barre—was kind of an aside, since the main topic was The Brookings Report and Morningstar's misinterpretation of it (see Footnote #2). This blog was highly critical of Morningstar's use of the report in argument, back in January 2015. Quite why the frisbee expert should have such disdain for someone who generally attracts accolades is anyone's guess. Possibly AM* would prefer a commentator on spaceflight who was more open to the Hoagland-style claim that the Moon is littered with ancient technology. Burke-style documentary television doesn't cover that for the simple reason that it isn't true. 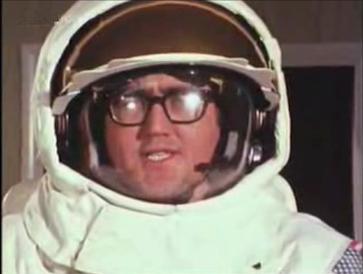 My personal opinion is that that pair of documentaries, aired on the tenth anniversary of the first Moon landing, were an important contribution to the history of spaceflight, and I can't fault Burke's final conclusion that Project Apollo did actually have something to offer the world apart from non-stick frying pans. These films (yes, films not videotape—this was 1979) are undoubtedly good information, and undoubtedly entertaining, but to categorize them as Infotainment is missing the point, I think.

Disclosure: At one time James and I were colleagues in the BBC Science Department.

His TV series 'Connections' was a very interesting look at the history of human technological development, and I always enjoyed watching him.

I have just re-viewed the programme "The other side of the Moon (1979)" with James Burke and again find it a very well-produced and informative programme even for the lay person, still today it's interesting for me despite spending most of my own career in the Space business. It was programmes like this in my early years that stimulated my interest in that direction (and most certainly many others some of whom I have known).

Anybody who calls James Burke "the original Mad Scientist" and goes on to suggest "He rants in mindless twit & twaddle, more of a poet than a scientist..." actually demonstrably proves his own total ignorance and lack of understanding of any subject matter beyond that found in junior schools. Of course, one must presumably make allowance for the apparent Faraday cage surrounding his head which may have sufficiently attenuated the electromagnetic signals* carrying such programmes and other real facts from entering his mind.

As Mr. Concannon notes, the Apollo program gave a great deal more than the oft-quoted frying pans despite its originally limited scientific agenda. Also, while it can be recognised that not all exploratory missions require the inclusion of manned space flight it was very clearly demonstrated that the presence of a human in certain operations can well exceed the ability of any remote-controlled machine or 'robot', notably when it comes to dealing with the unexpected or with anomalies that crop up.

"Infotainment"? That term might be applicable to certain sensationalist 'news' programmes or other nonsense but at the time of the programme I do not believe that the term had yet been coined. It certainly has no relevance here.

* The cage must have had extremely small apertures in its construction such that even frequencies as high as visible light were effectively attenuated, avoiding TV viewing or reading.
I should question his hearing ability though, since such a cage would not sufficiently attenuate physical vibration, e.g. audio from loudspeakers.

As long as this thread isn't too boring, then fine.