Mike Bara, on working with Richard Hoagland as joint author of Dark Mission: The Secret History of NASA:

That was a little gem from 70 minutes of chat with Chris George Zuger (whoever he is), poured onto Youchoob as a show called Den of Lore (whatever that means) last night.

The split screen  showed both Mike and his interlocutor, giving Mike ample opportunity to hold exhibits such as his book covers up to the Skype camera, and Chris Zuger, a recent renouncer of ciggies, to show us himself taking  puffs from his vape tube. The discussion started with the Nazca mummy, and Bara reiterating the only correct opinion he's had in ten years. Then it wandered through his conversion to conspiracy theory by TWA800, to the usual artifacts on Mars and the Moon, to UFOlogy. He had a hilarious take on this thing: 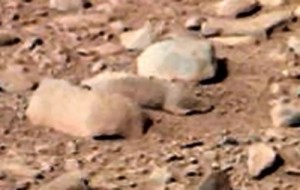 He said it's a picture of an Arctic lemming, taken on Devon Island, which NASA is "passing off" as a picture of Mars. It does look a bit like a lemming, indeed.

...but by what twisted logic would the Curiosity team at JPL resort to such deception? The image dates from September 2012, nowhere close to April Fool's Day. This is just more of Mike Bara confusing "looks like" with "actually is." (see Mars rat taking Internet by storm -- space.com 31 May 2013.)

Update 27 July:
During a brief appearance on Coast-to-Coast AM, Bara let drop that he's completed a work of fiction. He didn't say whether this was a novel or a screenplay, but either way, God help us all.My bet is that, like his brother Dave's fiction, it will feature a hero who is utterly irresistible to women.
at 10:35 AM

It sounds like Bara was able to put up with Hoagie's BS just long enough to collect a royalty check.

By the way, Bara hinted that he was having trouble finding a publisher for his current book ideas, and was considering self-publishing. I suggest he takes a look at the sad history of Bret Sheppard & Karen Patrick's self-published Flyover Tsiolkovsky Crater: A Secret Base on the Moon. Published via CreateSpace on 15 December last year, withdrawn in April 2017 after negligible sales and an absolute clobbering by Amazon reviewers.

C'mon guys, it's just a poorly done, mutual back-scratching exercise, hopefully building up to a massive publicity storm for both authors and all their books. Can't you see that?

Of course, poor Mikey's wrong again. If Hoagie was a perfectionist, his books would be better, stronger, faster, more accurate. I guess that could be negated by being irrational, but again, that's not my perception or experience of perfectionists. They tend to be highly intelligent, and quite "rational" in a very narrowly focused way. (Lousy work-life balance and all that.) Steve Jobs is (ok, was) one example of a well known perfectionist. Can't say his products were shoddy... So, again, I could argue, Mikey is wrong on that as well.

Meanwhile, poor Mikey is also publicly admitting he's diabetic. That would explain a lot... Would it not? You guys knew that before?

Yes, I knew he was diabetic but I'm not sure how much it explains. I don't think it explains his extreme homophobia or his ignorance of physics and astronomy.

He's also one of those unfortunates who gets excruciating back pain. I sympathize.

If Bara is looking to promote any books, it would be his and no one else's. The perfectionist stuff is just another way of saying Hoagie likes to add more shit to the material than Mikey thinks is needed. Bara is smart enough to not come out against Hoagland, but that doesn't mean they're best buddies.
As to his publishing problems, it might just be that the market for his brand of woo has played out. Without a dynamic radio host (Noory doesn't qualify) helping to promote such BS, the audience is likely to get bored and move on to other forms of irrationality. That's the problem with writing essentially the same book for the past decade or so. People get the feeling they've read all this before, because they have.

Chris, I defer to your greater knowledge.

expat, my experience of a number of (probably poorly self-regulating) diabetics is that even temperedness and self-restraint are qualities they frequently tend to lack. Fluctuating blood sugar levels are probably like fluctuating DC supply voltages to a computer: Memory dropouts, CPU crashes, ALU errors, peripheral disconnects, interrupt priority and control failures, component burnouts, you name it... Abusive outbursts are not uncommon. Vindictiveness seems to be greatly increased. Likely, existing phobias will also become "inflamed". The brain becomes unstable, when alternately drowned in too much, or starved by too little, blood sugar. (I had a very skinny gf once, who had to be regularly fed or the bitch inhibit switch would trip! A great survival mechanism, when you think about it...)

The ignorance, well, that doesn't require much explanation. It's just that some of us are not intelligent enough to recognise our own ignorance. That's a global problem, unfortunately, that even Presidents are not exempt from.

2%,
I'm a diabetic myself, and I've never had any personality change due to it. Bara has always been an ignorant asshole. The diabetes didn't cause that.

You must know what you're doing, and take care. Long may it last, Chris.

I worked under a diabetic for a while, hence some of my observations. Also, my wife recently did a short term stint in a company which had a diabetic accounts lady. In the space of 7 months, she had two serious diabetic episodes, with fitting and convulsions or similar. At other times, she was simply grumpy, or "hilarious", laughing loudly etc. Her emotions were "all over the place."

Maybe Bara is a bit that way, but as I said before, it has nothing much to do with his obvious ignorance.

That said, there may be a connection. Maybe he used to know a lot more, and maybe he knows he used to know, but doesn't realise he no longer does. Diabetes can play hell with the memory too. And consciousness in general.

Anyway, I did a bit more research into Bara yesterday. I read some of his choice posts. Frankly, I don't know why you guys bother with him. He's a piece of trash. There are much bigger fish to fry. It's amazing what rubbish people will believe.

In my opinion, people like Bara, Morningstar and Hoagland do NASA a big favour.

« Frankly, I don't know why you guys bother with him. »

It's a fair question, but the answer is that he has access to the mass media. As I've written more than once, Bara's interview performance is very good. He answers questions without wriggling and his answers are the right length. That makes lots of people believe him--and not just Las Vegas strippers either.

The same applies to Hoagland in many ways. He's very, very articulate and makes complete balderdash sound credible. So many, many people now quote "NASA -- Never A Straight Answer" and where did they get that from? Hoagland. Ask them to cite a few examples of NASA prevarication and they fall silent. It's the power of "If it doesn't fit, you must acquit."

In The United States of America, Patrick, a defendant is innocent until proven guilty beyond reasonable doubt by a jury of one's peers. That's one of the reasons why we kicked England's totalitarian ass. Now, if you have some new evidence to prove guilt rather than half ass debunk, that's too bad, because you can't be tried twice for the same offense in the US. Your typical snide slip shod approach to criticism is clearly exemplified here.

2%
Your observation that people like Hoagie and Bara are actually doing NASA a favor is an interesting one. Hoagland has himself been accused of being a government agent, whose job is to discredit NASA skeptics. I think it's nonsense, but if he were, I don't know what he'd be doing different.

Theadora dear—I have no idea what you are writing about. I'll allow that one hysterically inaccurate comment, but NO MORE.