The blogpost I wrote on 8th April, "Doing Hoagland & Bara's math for them," was a surprise hit. It attracted almost twice as many views as, say, the 12th March post on Robert Morningstar's weird math.

Nice to know that my readers aren't scared of a little trig. That  being the case, today I thought I'd serve up more of the same. This has nothing to do with Hoagland & Bara's nonsensical ideas, it's just a thing.

Following on from that April post, I wondered what would happen if you substitute a cube for the tetrahedron. In other words, if you inscribe a cube inside a sphere, centered on the equator, what would be the latitude of the contact points? 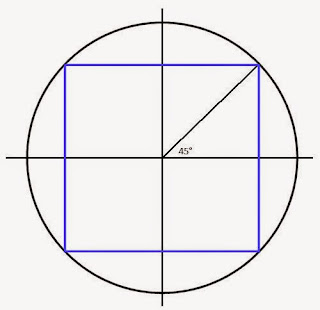 If you thought that, you were WRONG. That's probably what Mike Bara would have put in one of his horrible books, supposing he felt the need. To scale, the cube actually looks more like this, with the side of the cube defined as 2h. 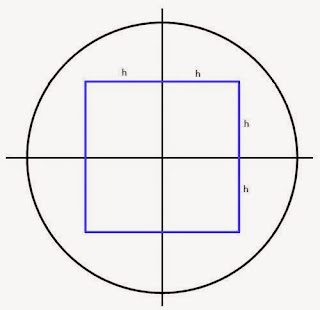 To visualize it correctly, you need to rotate the cube 45° and look at it along the diagonal, like this: 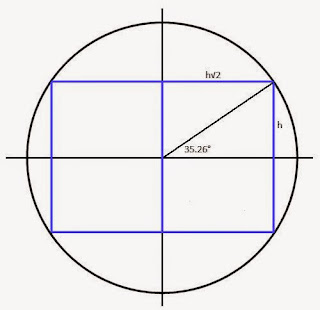 If the side of the cube is 2h, the diagonal is 2h√2, and therefore the tangent of the latitude is h/h√2

Extra fact: the radius of the sphere is h√3, so if you were asked "what is the side of a cube that would fit exactly in a sphere of radius r?" the answer would be 2r/√3. The second diagram is less surprising knowing that.

So there you have it. Your cocktail party conversation all set for the party season. No need to thank me.

Update:
Guess what's exactly at 35.26°N? Richard Hoagland's former home in Placitas, New Mexico. Mike Bara's former home in Redondo Beach, California is not too far off, at 33.8°. We could make a religion out of this....
at 10:41 AM

Updated with interesting information about what happens at the 35.26° latitude.