Thus Mike Bara, embarking on another 234 pages of recycled drivel on a topic that exists only in the minds of the paranoid, and the credulous audience of Coast to Coast AM. To be fair, he only said the book is about truth, he never promised it was actually true. And of course, it isn't.

Phobos: hollow or porous
It isn't long before our Mike strays very noticeably from truth. Chapter 1 is almost all about Phobos, the senior moon of Mars. Like his former co-author Richard Hoagland, Bara utterly fails to grasp the meaning of the recent findings about Phobos. He correctly quotes from the report of Mars Express's 2010 fly-by -- "We conclude that the interior of Phobos likely contains large voids. [T]hese results are inconsistent with the proposition that Phobos is a captured asteroid" (Bara's emphasis).  But then he writes this drivel:


"Allow me to translate for you. If Phobos is not a captured asteroid ... then it by definition must be an artificial satellite."

Elsewhere he writes that Phobos is one third hollow, and this is mind-boggling. But it isn't mind-boggling at all. A paper by Britt et al.note 1 in the Lunar & Planetary Institute publication 'Asteroids' cites 30% as a fairly common figure for the "macroporosity" of one class of asteroid.

Figure 3 from Britt, et al. showing that the macroporosity of Phobos is nothing special

In fact, neither of the words "hollow" or "porous" quite fits the known facts, and both manage to be misleading. The Mars Express version, "contains large voids," is correct but cumbersome. Imagine a pile of bricks -- not a neat stack of bricks, but a random pile, thrown together. It's not hard to imagine the voids adding up to 30%. And of course Bara is laughably wrong in asserting that the only alternative to "captured asteroid" is "artificial satellite." The final conclusion of the Mars Express science team was that Phobos is re-accreted from orbital debris.

THEMIS: Whodunnit? Whydowecare?
Richard Hoagland deserves a share of the royalties for Chapter 2, since it's pretty much a straight steal from Chapter 10 of Dark Mission, even including the chapter title, "Mars Heats Up." Both chapters tell an over-detailed story of infra-red imagery of Cydonia from the THEMIS instrument on Mars Odyssey (2002). On one side, the heroes Hoagland, Bara, Laney, Isenberg (the latter eventually defected, if I have the story straight.) On the other, the NASA villains Smythe, "Bamf", Gorelick, Christensen. We are told who posted what on what bulletin board at exactly what time on what date, all to insinuate that the heroes got a bum deal from the villains, but triumphed in the end. Hooray!!

For all I know, Bara's recitation of this cyber-skirmish is accurate in all respects, and the villains really were villainous. But the thing is, I didn't care when I read this shit in Dark Mission, and I care even less now.

Chapters 3 and 4 extend the "heroes and villains" theme and Bara uses the opportunity to slag off a few people he regards as his enemies. Mark Carlotto, another defected ex-ally, is "absurd," "unethical." James Oberg is a "charlatan." The astronomer Phil Plait is "a grotesque little toad of [a] man." When a writer flubs even his gross insults by missing out an indefinite article, it's probably time to give it a rest.

That face
I had foolishly hoped that Mike Bara would go light on Cydonia this time around, having written it to death in AAoM1. Alas, no, he gives it the (almost) full treatment. Just a glance at the Chapter 5 images in the gallery will give you the idea. He hates everything NASA did with the "Face," showing no gratitude for the fact that they went out of their way to re-photograph the damned thing for PR, rather than science, reasons. In fact, he uses the acronym NASA as though it were an adjective meaning "corrupt." He loves the 3-D images from the stereo camera on Mars Express (which was ESA, not NASA, so it isn't villainous, see?) He references the 'Cydonia Geometric Relationship Model' perhaps unaware that Stuart Robbins recently drove a stake through the heart of that highly dubious idea.

Here's part of Bara's recap of the reasons that the face is a Face, built by Martians:


"[I]t has two aligned eye sockets, the tip of the nose is the tallest point on the structure, there are two clearly defined nostrils in the nose, the west eye socket is shaped like a human eye including a tear duct, there is a spherical pupil in the eye...."

So how does he explain that wonderful 0.25 m/px image taken by the HiRISE camera on Mars Reconnaissance Orbiter on 5th April 2007? This best-ever image shows that that entire list of features is in Mike Bara's imagination. How does he deal with this fact? Simple -- he reduces it to a 2 x 2.5" thumbnail and darkens it so that it's barely decipherable. Then he writes that its lack of detail is "suspicious."

Here it is. Admire the detail.

The pareidolia game
The last hundred pages amount to a sort of visual shopping list of bits of images from various Mars cameras that remind Mike of other things. This really is just a game, and Bara is by no means the only person who plays it. From George Haasnote 2 (who calls himself 'The Cydonia Institute') he gets "the parrot," "the roadrunner," and "the Nefertiti." From Joseph Skipper of "Mars Anomaly Research," he gets a vaguely skull-like object which, of course, is a skull. Bara reiterates his scorn for the term "pareidolia" and then falls slap-bang into its tender trap, discerning in "Parrot City" a whole civilization, with bridges, tunnels, a processing plant, a waste-disposal facility.

This is my absolute favorite bit of "Baradolia" -- a replica of the famous Theme restaurant at Los Angles International airport, right there on Mars. Here it is, compared with its terrestrial original. 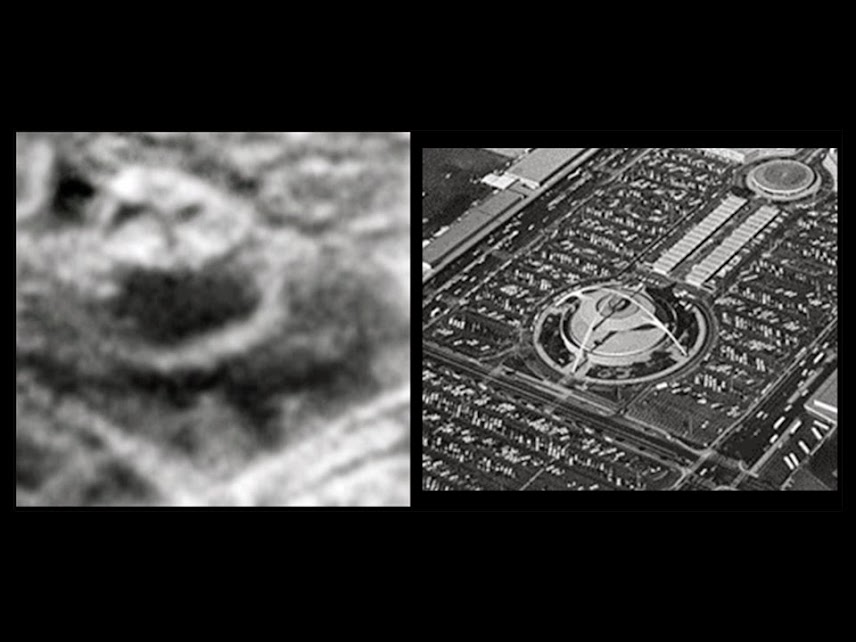 image credit: NASA/JPL/Bara
This is right near the office park, the race track, and the pumping station. No, I'm not kidding. Mike Bara really believes this.

Then he gets into the Eye of Horus. The dinosaur bones. The tank, the turbocharger. The only problem I see is that some readers of this truly terrible book will believe it too. I comfort myself with the thought that many buyers of this thing (the Faceboo fans) won't actually read it, though they may well write "friend of the author" 5-star Amazon reviews.

More of the same then from bara then, the man who claims that we're not from Earth because we need to wear sunglasses.

I like the way the artifacts he sees are all things which mean something *on Earth* *right now* to *us*. There are no decayed interdimensional portal generators or bio-engineered part-metal part-bone robot hybrids. But there are turbochargers (for what, all those internal combustion engines that work on Mars?), single sports shoes and the like.

Just when you think he can't degrade himself any more than he already has done.

How much more Hoagland crap is left for Mikey boy to plunder.
What shite will he come up with next.
Should make some more comedy.

@Binaryspellbook
That was my thought too. I admit I was pleased to see him rip Hoagie off with the first 2 Ancient Aliens books because no one deserves to be ripped off more than the Hoagster. To continue to try to use the same material for yet another BS masterpiece though, is just plain lazy. At least Hoagland had the good sense to only try to write The Monuments of Mars once.

@Expat
As to your second update dealing with Haas claiming Bara used his images, for once I'm on Haas' side. While I don't think the material Haas produces is worth much in any objective sense, it's still his stuff and others have no right to use it for their own personal gain. Bara is demonstrating the same callousness and lack of concern for other people's intellectual property as Hoagland. They both try to profit from other people's efforts.

It's a tricky point, actually. The fact that the nauseating Mr. Haas crops and rotates a NASA/JPL image and says "Ooo look, a parrot!" doesn't really assign copyright of the image to him.

True. Now that I think about it, it would be risky for a publisher to run with photos of questionable copyright. Even the dirt bag publishers Hoagie and Bara deal with might not want to go there.

simon: Thanks for the comment. I'm not aware of any lies propagated by NASA. If you know of some, please cite them.