As I noted in a comment yesterday, I'm not willing to subscribe to SiriusXM so I didn't hear the show. I combed through the 25-page discussion thread on BellGab, and gleaned a pretty good idea of what went on.

The BellGab thread consists of comments and reactions from Art Bell fans as they listened to the show. What stands out a mile is that 100% of them think Art Bell is God, and 90% of them think Hoagland has no credibility whatsoever.One opinion was "Art's fine; I just object to Hoagland as a guest, ever. The man's a fraud" (Sardondi.)

The images that never got discussed

A page of images was provided for listeners to follow along with.  I loved the captions to the Inaccutron images -- presumably written by RCH himself. 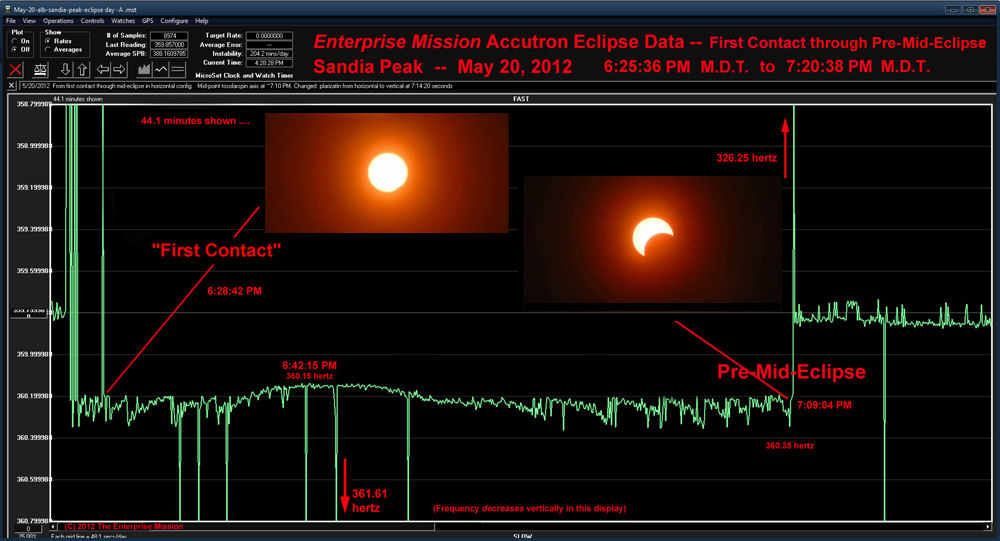 CAPTION: Enterprise Mission Torsion Field measurements of the Annular Solar Eclipse, May 20, 2012. Contrary to ALL “current physics” expectations, just before “first contact” the modified Accutron tuning fork detector “went nuts” — exhibiting ranges of frequency deviation from the standard ~360 hertz vibration rate exceeding 1000%!
The theoretical explanation behind these “extraordinary frequency changes” — when the Accutron readings should have maintained a simple “flat line” throughout the entire Eclipse, according to all current Physics models — is currently under intense investigation.

MY COMMENT: There's a little note in red letters at the bottom: "Frequency decreases vertically in this display." Well, it clearly does not, since a down-spike is labeled as 361.61 Hz and an up-spike is labeled 326.25 Hz.  So Hoagland presents a data trace that is obviously mis-labeled, and in which all the potentially interesting parts go off-scale, and he calls this science??? As for " currently under intense investigation" -- yeah right. Intense since May 2012? 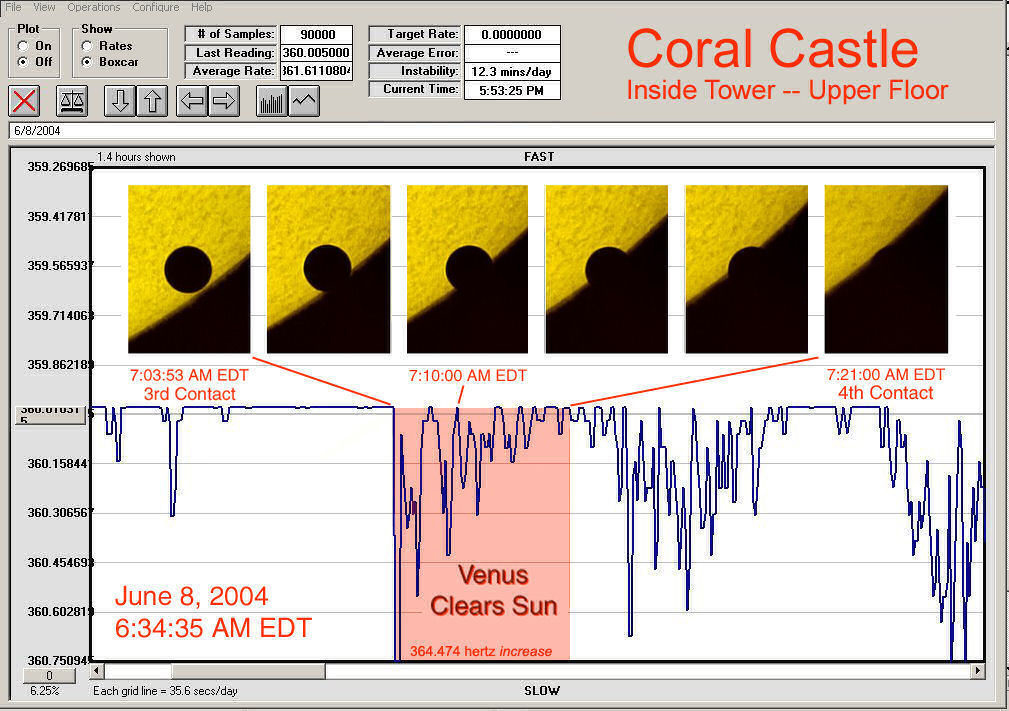 CAPTION: Enterprise Mission Torsion Field measurements of the striking “Hyperdimensional Effect” on Earth from Venus “transiting the Sun” — June 8, 2004.
Note the striking asymmetry in the detector response — with ALL the sudden frequency deviations taking place as Venus “moved off the Sun” — in striking contrast to the “zero changes” that occurred when Venus began its Solar Transit, several hours before

MY COMMENT: Note the fact that the most pronounced frequency excursions happened when the transit was all over. Also that, once again, his data is off-scale and would be rejected at peer review. He has no right to comment on "zero changes" at the start of transit, since the sun had not risen at Coral Castle then. It did not rise until about an hour before third contact. This is junk.


There was a third image -- the data from Teotihuacan 2009 -- but this was so badly botched that the caption was the same as the 2012 solar eclipse one.

Reading the BellGab thread, it seems that Art Bell never got around to asking about these pathetic examples of Hoagland's incompetence. Perhaps it's just as well -- it's obvious that Art didn't give Hoagland the free ride that he's been used to from that rhetorical lightweight George Noory.

Update
Commenter Dee has helpfully pointed me to a Youtube version of last night, which I've now (mostly) reviewed. I fell off my chair at this one:

Regarding the Surveyor 6 images, which occupied most  of hour 1, I invite everyone to look at this image, which shows the original orientation of the "dome" picture. Hoagland, of course, didn't show it that way because it explains what we all see. Bear in mind that the image was transmitted as a vertical scan at very low bandwidth. THE DOME DOES NOT EXIST.

And by the way, Image #1 in Hoagland's set absolutely does show contamination on his scanner glass. It's as plain as day.
at 8:22 AM

Although I haven't listened myself to it yet, I noticed this upload at Youtube.

Thanks for the image review. The first time I saw that page there were way less images posted. Still waiting for someone to put together an article about that lunar and Martian geometric “scaffolding” to be various forms of grain and pixel aliasing in combination with scanners and software filters (both might have similar effects on image processing when looking at the finer details). It might take a lot of work to retrace all the steps though.

The way I was reading it was that at the Y-axis the frequency decreases when going up. Not anything about the measurements themselves. It's rather ambiguous, that's true, as it should have been then written at the scale itself. But I didn't see a problem with it. Then again, I've read too much Hoag, my mind might work the same by now :)

Could we give Hoagland a pass at least on this one?

Yes, OK. It's the labels SLOW and FAST (extreme bottom-center and top-center) that are clearly wrong then.

I went on Art Bells website to look at the description of the Hoagland show. I have a good idea who actually wrote the blurb from the prose style.

Was it "Principle Investigator" that gave it away?

That and the inappropriate use of italics and UPPERCASE used for emphasis. ;-)

Speaking of Art Bell, anyone remember this classic?
http://www.youtube.com/watch?v=dFKFQ61dgdg

And the corresponding Snopes debunking.
http://www.snopes.com/religion/wellhell.asp

Expat: "Yes, OK. It's the labels SLOW and FAST (extreme bottom-center and top-center) that are clearly wrong then."

Wow! Are you saying he might have switched the scales around? ;-)

The usual set-up is seen on this supplier page. There might be a reversed setting but then it still would be a software bug in the display.

Now why would RCH prefer for the frequency to go up during transitions? By the way, as seen in the example above, the fork tunes down when the watch is turned facing the sky. Nah, that would be too simple!

I blogged previously about the eclipse display and its many problems. Look closely and you'll see that he originally had time increasing with -x. For the Art Bell show, he flipped the display horizontally but didn't notice the incorrect FAST/SLOW labels.

He's never going to pass peer review as long as he's this careless.