Mike Bara posted a link to this article on his strippers-and-porn-starlets page today, and added the comment:


The article describes the still-forming Jupiter-sized planet of HD 100546, a young star in Musca. The hard black edge is part of the coronagraph obscuring the star itself. The work was done by Sascha Quanz et al. at ESO’s Very Large Telescope. 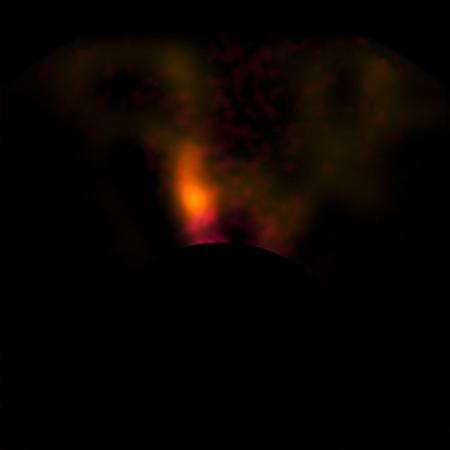 It's nice to know Mike reads the science news, albeit a Reuters/Yahoo digest rather than the original report. However, as evidence for solar fission this is worthless. Doesn't even begin. Au contraire, the original report says the observation favors accretion:

"According to current theory, giant planets grow by capturing some of the gas and dust that remains after the formation of a star. The astronomers have spotted several features in the new image of the disc around HD100546 that support this protoplanet hypothesis. Structures in the dusty circumstellar disc, which could be caused by interactions between the planet and the disc, were revealed close to the detected protoplanet. Also, there are indications that the surroundings of the protoplanet are potentially heated up by the formation process."

Update:
On another subject, Mike has also posted his TripAdvisor travel map — 51 cities in 4 countries. Mike Bara, the world-famous archaeologist, hasn't been to either Peru or Denmark. So why in heaven's name do the producers of Ancient Aliens consider him an authority on Aramu Muru (Unexplained Structures, Season 2 Ep 8) and the Wikingerburgen (Aliens and the Secret Code, Season 3 Ep 13)?
at 9:52 AM