Summertime, and the blogging is easy....

...at least so it seems this summer, as Richard Hoagland and Mike Bara supply ready-made entertainment in their replies to scientific inquiry. Bara's specialty is, of course, ridiculous insults that make him look more like a bigoted lunatic than any kind of bona fide researcher. Hoagland's attempts to seem like a scientist are almost as good as a Saturday Night Live sketch. Here's his reply to Derek Eunson's recent message, and Derek's follow-up:

For someone who claims a PhD., you appear to know precious little about "shielding"; as even high school physics students are taught, what you detect from any given radiation source is a function of the energy of the emitted radiation ... and the efficiency of the shielding blocking it.

I never said that "torsion shielding" was 100%;  in every specific case, there are obviously "thresholds" in a) detectability, and b) in the effectiveness of what torsion field changes accomplish ... below a certain minimum.

Obviously, if the Baltic object does contain an active "torsion source," to be interfering with even "standard electronics" through that much seawater as we discovered serendipitously in England in measuring some of the ancient monuments), it must (still?) be VERY powerful ....

That is why it would be in interesting to be able to actually measure such a possibility directly, instead of simply inferring "possibilities."

Or, are you also against empirical measurements?    :)

Look forward to your specific responses re the fascinating results of our recent eclipse and Venus Transit torsion measurements -- to be published on Enterprise shortly.

I do indeed have knowledge of shielding. Certainly more than your co author Mike Bara, (who thinks that Faraday cages are made of lead) does. You may also want to have a little chat with Mike and explain what centrifugal force is. He clearly doesn't understand and thinks it makes us heavier.

Regarding shielding. You stated on Coast to Coast; "The torsion field effect influences not only the Sun ... but it also interacts with living systems on this planet and imprints a unique torsion field pattern in each living organism when they are born. Why when they're born? Because  water turns out to be a very good screen of torsion fields. So you only are exposed to the field after you leave the womb."

Seems pretty clear to me, "So you are only exposed to the field after you leave the womb."  Not "exposure increases after you leave the womb." No mention of shielding from you here Richard. In fact, implicit in the above is that water is a perfect shield against torsion. So water in the womb blocks torsion, but 80m depth of Baltic sea water may not.

I'm not against empirical measurement at all, but if you declare that you're measuring something, you need to do more than merely sense it, or claim to sense it. That being said, would you be so kind as to indicate what units you measure torsion in ?

No sign yet of those Venus transit measurements on enterprisemishmash (the stuff that Hoagland was working on "literally around the clock for weeks"). Or any answer to Derek's legitimate questions. Or any response to Neville Parchemin's attempt to enlighten Mike Bara on the question of shielding electromagnetic vs. ionizing radiation. But then, Mike is trying to finish his new collection of utter bollocks book, and his excited announcements on FooBoo indicate that he's found not only a flying saucer in a hangar on the Moon, but a crane, too. Look... 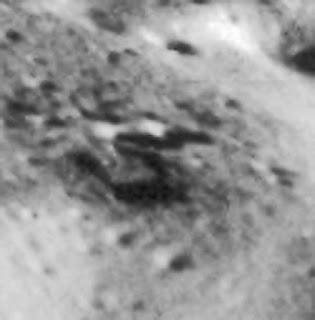 Just take a look at that image and you can see how it can create torsion fields. It is just a large spanner half buried in the mud, and as every physics student knows, spanners work by applying a torque to a nut, and the application of torque to a body applies a torsion to that object. Simple really :P

Lack of structure aside, how large must that "crane" be?

Again, he gives no coordinates, and doesn't explain why he uses 50-year old Orbiter photos, when current LRO photos are available.

When asked for useful things like coords, and/or photo refnos, Mike has a tendency to reply "I'm not going to do your homework for you" -- perhaps adding "....you fucking douchebag."

Do you think he'd be so rude even to his fans? I suppose it's possible.

Take a look at Hoagie's page. Michael Latimer is slamming him for his silence on the Venus Transit.

Gee willikers! Mikey wouldn't be in need of a little cash now, would he? (It only costs $7.99 a year on godaddy.com)
He could try asking 40,000 fans to donate $20 each. Worked so well for his buddy Dick.
(I love the "without content" bit. Like that could be anything but an improvement)

This domain name (MIKEBARA.COM) without content is available for sale by its owner through Sedo's Domain Marketplace.

I think we've blown a great opportunity here. Neville shouldn't have drawn Mike's attention to the expired domain name. Instead we should have bought it and collaborated on OUR idea of what a Mike Bara web site ought to be.

Gotta love the "as even high school physics students are taught" line. It's a wonderful and ironic bit of condescension coming from a guy who's last formal education came from such a place. Apparently he thinks that even his critics should consider him an authority figure.

As to the substance of his comments, yes it is a lame excuse. While the "source" of the HD physics might be closer (BTW, has Hoagland ever stated that torsion fields follow the inverse square law?), the shielding is a lot thicker. He's just caught in his own logical inconsistencies on this one and just won't admit it.

I was also interested in that "....as we discovered serendipitously in England in measuring some of the ancient monuments..."

He's never written up his adventures at Stonehenge and Silbury Hill, beyond some very offhand anecdotery on C2C. It's extremely hard to understand how a discovery of the shielding effects of sea water could have been made at either place.

I'm quite sure we're never going to be told.

Considering how often he uses the qualifier "possibly" to cover his own ass, it's pretty funny that he's claiming a bona fide "discovery" from the ancient monuments data. If that's the case and it's really as airtight as he claims, then where is the revelatory publication? That must be what he means, because words have meaning, you know.

I can't wait to see Hoagland and Bara's take on this hole in the surface of Mars. I'm sure it will be stunning confirmation of something:

I just had a look at Mike Bara's Facebook and learned that he is one of the 1,725 people who've clicked "like" on the "George Zimmerman is Innocent" Facebook page.

That's pretty low, even for Bara.

Still no reply from Hoagland. Not that I expected one. It is simply typical Hoagland. You get one reply where he will wax lyrical pretending to be a real scientist. But when you take his words apart he says nothing. That may fool the layperson but not one who actually does real science for a living.

I'm going to do a hatchet-job....er sorry, review of "The Choice" this weekend on Amazon. I invite the emoluments crew to do the same if you have not already done so. Let's one-star this piece of shit into oblivion guys.

Mike Bara is a moron.

Shhhh, not so loud. Adventures Unlimited Press might overhear and cancel his book contract.

I just saw this afternoon on TV for the umpteenth time Clint's "Space Cowboys" .I love that movie,specially the ending squence. I could not help thinking of you, pals.http://www.youtube.com/watch?v=T_lVI9CjsaE&feature=related

Nor could I help thinking of youthis morning, Expat, when I heard Gershwin on the radio, could not stop laughing at the refrain, despite how sad it´s supposed to be the song!!...The bloggin´is easy...HHhhaaaaa!http://www.youtube.com/watch?v=MIDOEsQL7lA

I happen to be a big Gershwin fan. I consider Rhapsody in Blue among the finest pieces of music ever written. It's also, by the way, perhaps the prime example of what procrastination can achieve. Gershwin thought about it, thought about it... didn't actually start composing until less than a month before it had to be ready for the orchestrator.