David Fravor appeared in a marathon four-hour podcast hosted by Lex Fridman, posted two days ago. Fravor, of course, is the US Navy F/A 18 pilot involved in the 2004 sighting of unidentified aerial phenomena. Fravor's buddy Chad Underwood famously described one of these as a 40ft-long "tic-tac" because of its appearance (see this blog, December 2019). 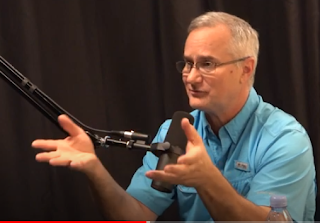 It's a treat to see a key witness talking at length in a fully professional studio with good quality audio. But we're no closer to understanding what the tic-tac actually was. Here's a taste of it.

02:08:02 LF: "The basic question of... what do you think was it? If you had to put money on it. Is it advanced human-created technology? Is it alien technology? Is it an unknown physical phenomenon--you know like ball lightning for example .[..].. Is it, like I said, perception, cognition..a kind of hallucination that leads you to misinterpret things you were seeing .....or is it misinperpretation of some known physical phenomenon like an ice cloud or something like that? What do you think it was?

[..] I would say.. no, I mean, it looks... from all my experience      it was a hard object, it was aware that we were there, it reacted exactly like it was  an airplane [that would] do something exactly what I would do. You know, it mirrored me, it wasn't aggressive, it was never offensive...

DF: "If you'd asked me in 2004 I'd have said "I don't know". If you ask me now, so we're coming up on 16 years ago, for a technology like that -- you know and let's assume that it didn't have any conventional propulsion system, and I don't think it did ...er... I would like to think that if we had a technology that would advance mankind leaps and bounds from what we would normally do, then it would start coming out . To hide something like that for 16 years...."

Thanks to Chris Lawrence for monitoring

I thought Metabunk had already cleared up that puzzle....

I got the sense that Fravor is genuine and knows he doesn't have the answers and reports honestly what he and the others have seen and detected. He said a couple of times he's not a conspiracy theory guy. Likewise he seems to lament the instant dismisal of ideas relating to our understanding of the universe, consciousness and life, and I agree with him on that. Fridman's podcast explores those areas with his guests; take a look at some of his others.

Last night on Coast to Coast AM, John Greenewald put forward an interesting theory. He speculated that the tic-tac and other UAPs are USAF advanced aircraft deliberately tweaking the Navy fliers as a test.

Uh-oh, here's the pilot reporting the impression the object was reacting to him. That's a red flag in my playbook.

Several years ago, I described the ‘questionable foundation’ of Leslie Kean’s book as the naïve and unverified faith in pilot reports. She has insisted the UFOs show intelligent purpose based on their perception of the nature of their witnesses, since theyare reported to behave differently when seen by military pilots than when seen by civilian pilots [when the more common-sense explanation is that different pilots report observations in terms of what they expect from their own different experience bases]. The data archives she touts as ‘unexplainable’ pilot sightings [such as the French ‘Weinstein Report’] can easily be shown to contain numerous pilot misinterpretations of unrecognized space and missile activity around the world, so who knows how many other prosaic explanations were never found by the ‘investigators’? See here:

A more common sense explanation is that pilots preferentially report random visual stimuli to behave the way they are TRAINED to expect. Military pilots enhance their survival odds enormously by instinctively entering all air-to-air engagements expecting the worst and preparing to detect and react to it.

I'm working right now on a report that perfectly illustrates this predictable AND DESIRABLE military-trained pilot attitude. A Falcon9 second stage had just delivered its payloads into orbit and lit its engine to push itself into the atmosphere for safe disposal. The bizarre plume was seen widely in France just after sunset, including by a Serbian commercial airliner pilot who reported engaging it in a complex dogfight of maneuvers [which never happened]. Current issue of SUNlight has the details.