"Their ships were far superior to ours"

A certain professor, who wished to remain anonymous, was engaged in a discussion with Neil Armstrong during a NASA symposium.
Professor: What REALLY happened out there with Apollo 11?
Armstrong: It was incredible, of course we had always known there was a possibility, the fact is, we were warned off! (by the Aliens). There was never any question then of a space station or a moon city.
Professor: How do you mean "warned off"?
Armstrong: I can't go into details, except to say that their ships were far superior to ours both in size and technology. Boy, were they big! ... and menacing! No, there is no question of a space station.
Professor: But NASA had other missions after Apollo 11?
Armstrong: Naturally, NASA was committed at that time and couldn't risk panic on Earth. But it really was a quick scoop and back again.


The above is a made-up fantasy. No conversation even remotely like it ever happened. Yesterday I was googling around, as you do, trying to pin down the origin of this piece of UFO flim-flam. I failed, because it's been taken up, believed, and re-posted by just about every crackpot and cock-and-bull UFOsite on the net.

And that brings me to Linda Moulton Howe
People who browse LMH's web presence, and/or who listen to her monthly reports on Coast-to-Coast AM, probably know that she is not a reliable source, notwithstanding her slew of awardsnote 1 for documentary television. Linda's problem is that she's gullible. Like Robert Morningstar, she'll believe anything that portrays NASA as a deceptive agency that tells lies. Like Robert Morningstar, she routinely ignores the heroism of the Apollo astronauts (managers and engineers, too, let's face it) in favor of daft rumors about "what really happened." These people are in love with the idea that they're in possession of arcane information that most people aren't aware of.

So it wasn't much of a surprise, to me at least, when she resurrected this piece of dreck last Thursday night, attributing the quote to Buzz Aldrin in an interview for Atlantic Productions on 29 July 2015note 2. It's also on her web site, if you scroll far enough.

She also re-tells the old, old story of the "UFO" that followed Apollo 11 on its trans-lunar trajectory (she refers to the S-IVB rocket stage incorrectly as the 1-SB.) She writes of Aldrin:


"Now, he’s come forward and said it was a light that got close enough. It had size and shape to it and followed them all the way to the moon! It was some kind of craft or something like that."

Buzz Aldrin has done nothing of the sort.  He has always stated that the object was an SLA panelnote 3, and it was only visible for a short time, NOT all the way to the Moon.

By sheer coincidence, I came across a wonderful picture yesterday. 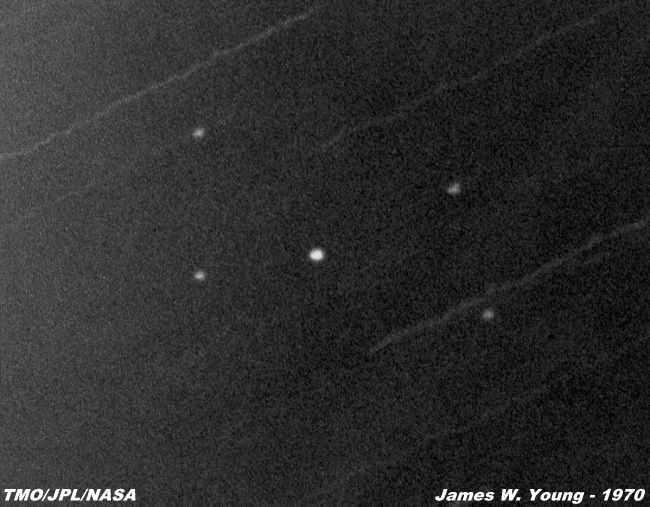 Know what that is? Here's the official description:


"A unique view of the Apollo 13 CSLM: the center dot is the Apollo 13 Command/Service/Lunar Module (CSLM) as seen [from] Table Mountain through the 24-inch telescope. The four dots around the CSLM are the tumbling SLA panels. The diagonal jagged white lines crossing the picture from the lower left to the upper right are star trails during the 5 minute exposure. The actual exposure was taken by guiding on the distant S-IVB upper last stage spent rocket body of the Saturn V launch vehicle. This was very difficult, since the brightness of the S-IVB was extremely faint in the 1200X magnification guide eyepiece, thus the jagged star trailed images."

So there you have it. SLA panels did indeed "follow" the CSLM for a while. Not surprisingly, since  they would have been given the exact same impetus by the Translunar Injection burn of the S-IVB. They would eventually diverge because of the very small additional thrust they would have had from the explosive bolts that detached them.

Does Linda Moulton Howe have any shame? I doubt it.

[2] Here she surely must be referring to Apollo 11: The Untold Story. This 60-min docco featured Aldrin, was produced by Atlantic, and aired on the Discovery Science Channel. However, that was 2006, not 2015.

[3] SLA = Spacecraft Lunar Module Adaptor. A semi-conical shroud that protected the LM during launch. Once en route to the Moon, it was discarded. The CSM then detached, turned around, and extracted the LM.

So, July 2nd was International UFO day. And Vice has one of Robert Morningstar's favourite images as a banner.

Thanks for the namecheck :)

I read the first half of the page with interest, particularly the claim about Tsiolkovskiy crater. Apart from the date of the Apollo 14 image being incorrect (if you look at the image sequence it is clearly taken after TEI on the 7th of February, not the 6th), the image supposedly identifies a 'glowing area' is inferred to be the part filmed by 16mm footage on Apollo 14 where there were 5 domes.

Unfortunately no-one else who has overflown this area has ever seen them, and given that Apollo 14's orbital path didn't go over Tsiolkovskiy it is highly unlikely that there is any footage of it to edit. The best coverage of the area is from Apollo 17's mission, which photographed it extensively, and Apollo 15. Neither mission took 16mm of the crater.

The 'glow' in the image, which is inferred to be something to do with those artificial domes, is nothing of the sort. By taking Japan's Kaguya image of the crater and stretching the Apollo 14 image to fit you can see that it is the top of a small range of hills:

I'm also curious about the photograph of Johnston in his astronaut fancy dress with the label 'Mars One', which just reeks of Photoshop...

I knew that picture of Johnston stank.

And here's Ken' image on top of it:

Monkey -- since you're obviously a guru of space phtography, do you have an opinion about what caused the blue flares on Mag 66, Apollo 14?

I wish I knew! I've seen various explanations about damage to the emulsion, and even radiation and cosmic rays. I think damage is the favourite, but how and when is a mystery!

I don't think they're restricted just to that magazine on Apollo 14 - I spent a lot of time going through Apollo images looking for stars and planets, and was led down many a garden path by them!

Here's one from Apollo 11 I found just at random:

Not as prominent as the Apollo 14 ones, but there many little blue dots in the top right.

Hmmm, I can only just perceive them. The problem with the Mag66 ones is that they aren't a consistent distance from any edge, as they would be if some norty cosmic ray zapped the whole reel.

Incidentally, Ken Johnston thinks the blue flare is likely to be a "blue ship". So much for his leet photo-interpretation skillz.

Was happy to see a report on Ms. Howe. At one time she used to have somewhat of a good reputation, but it just continues to disappear like a star in orbit around a black hole. The mere mention of UFO and the woman loses all objectivity.
Really enjoy your posts expat since first hearing of you on Stuart's Exposing Pseudo-Astronomy podcasts a couple years back. I hope you keep this up. I really look forward to your posts. You listen to the things I can't. I've tried. I'll turn Coast to Coast on for a minute or two and then I get so angry I just have to turn it off. So my hat is off to you and Stuart for doing it for me.

Thanks Alienmojo. Always nice to be appreciated.

OBM: "I knew that picture of Johnston stank. "

Cut him some slack on this, when he posted it he explicitly thanked Collins for the suit.

OBM: "The 'glow' in the image, which is inferred to be something to do with those artificial domes, is nothing of the sort. By taking Japan's Kaguya image of the crater and stretching the Apollo 14 image to fit you can see that it is the top of a small range of hills:"

Excellent work, and I'm reconsidering my shadow/visibility comment made yesterday.

James Oberg offers three images to add to this discussion:

Without taking sides on this debate, you are resorting to circular reasoning, Patrick. Just because the official description is contradictory does not make it accurate. NASA controls the data, and as you are aware, NASA maintains that the GFAJ-1 bacteria is proof of extraterrestrial life, despite the fact that many peers have proven that the bacteria merely is able to exist in an arsenic environment, but doesn't uptake that chemical element. In other cases, NASA would seem to deliberately muddy the water, so that no one can accurately ascertain the veracity of any apparent evidence, one way or another. Personally, I don't give Linda any benevolent benefit of the doubt. She, as does Hoagland, tries to discredit NASA on flimsy evidence, so that people will actually trust NASA, while NASA remains inscrutable.

Yes, but what about her interviews concerning Antarctica?

False. NASA Astrobiology no longer makes any claim about GFAJ-1, although admittedly certain web pages have not been updated since Felisa Wolfe-Simon's research was demolished by Rosie Redfield et al. GFAJ stands for "Get Felisa A Job."

Where has NASA ever retracted their assertion regarding GFAJ-1? Just because they haven't said a word since shown to be fraudulent is not to say that they admit to it. The web pages remain intact without correction or further comment, as you allude.

Are you paid by NASA, Patrick? Prior to the Pat-RIOT Act, the NSA used to employ intelligence agents foreign countries to spy on Americans, during project Echelon, so as not to violate US law which prohibits US agencies from spying on it's own citizens. The foreign agents would pass along information to their own agency, which would then provide the laundered intel back to the NSA. You are just a bit too much of a NASA can do no wrong monger, to be reasonably impartial.

If I remember correctly, the bacteria thesis was actually demolished at the original press conference by a member of the team. One of the chemists pointed out how the chemical bonds produced by arsenic would not be strong enough for a dna molecule.

Chris: Yes, that was Steven Benner.

I'm not proud. NASA ought to pay me to stop. James Orbsberg's a spook.