Space Shuttle Endeavour gave us a beautiful sight yesterday, as it launched into cloud bank to begin its 16-day mission to ISS. 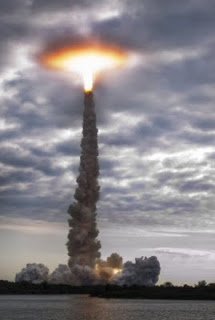 Richard Hoagland, despite having no special knowledge of the event or any relevant information to share, was invited on Coast to Coast AM to update us.

"The really cool thing about this mission, which is what makes real what I said a couple of missions ago about a transition between Newtonian science and hyperdimensional physics—the main payload on this flight, 134, is the AMS—the Alpha Magnetic Spectrometer, which is going to be attached to the Station permanently, and will be looking up into space as the Station whirls around the Earth every 90 minutes. And it is filled with all kinds of exquisite gadgetry—magnets, detectors, and all that—and they're actually expecting, George, they may actually find some fundamental new particles or aspects of the universe which would bring the day when hyperdimensional physics is public a little bit closer."


AMS-02 is a particle physics experiment. The primary instrument is a cosmic ray detector, and over time its investigators, led by Samuel Ting of MIT, may gather information about dark matter, anti-matter, and the origin of the universe. Nothing whatsoever to do with hyperdimensional physics.

I hope Dr Ting wasn't listening to C2C last night. If he was he'd have bust a blood vessel on hearing that the instrument he spent 16 years developing was destined to help an uneducated pseudo-scientist prove a wholly ficticious point.

Hoagland has a remarkably selective memory, as we know. He regularly "forgets" his unsuccessful predictions (there are no successful ones, actually) and omits to credit the work of others even when such work is copyright. What he actually said, on 2nd December 2010, was that from STS-133 on the Shuttle itself would be powered by torsion energy. In that, it goes without saying, he was WRONG AGAIN. Last night's mini-performance was very much worse than useless, in that the so-called science adviser imparted information that was not only unscientific but totally misleading. Shame on George Noory and Lisa Lyon. Their contempt for their audience gets worse and worse.
at 10:29 AM

Expat, it's called rationalization. Hoagland makes some off the cuff remark in the heat of the moment to sound interesting, and he's been stuck trying to justify it ever since. He has to know it's total nonsense (Noory certainly knows it is), but his ego will not allow him to back off. Also, the fact that he had nothing else to offer on the subject didn't help.

As to Noory and company's contempt for the audience, that's been true for quite a long time. I suspect Noory doesn't believe much of what he pretends to believe, especially when it comes to Hoagland. To push material you don't really believe, just to sell needless crap, does require a bit of contempt for your listeners.

WAL THORNHILL AND DAVID TALBOTT ON COAST TO COAST RADIO, MAY 18

Coast to Coast Radio, hosted by George Noory, will air a three hour interview with Wal and Dave, running from 11:00 PM to 2:00 AM Pacific, Wednesday evening, May 18. The program will focus on recent scientific discoveries that point emphatically to the Electric Universe. It will also note the encouraging progress of the Thunderbolts Project. In particular, the convergence with the Natural Philosophy Alliance deserves some congratulations all around.

Uwe Langer lol not to me they aren't ..I have looked into this extensively and it just makes sense and I know you agree because you were onto it long before I did :)
7 hours ago · Like

It's a lot more complicated; "the guys" on "Coast" tonight know NOTHING about the "other half" of this "electric equation"--

Comets are NOT "massively" discharging when they hit the Sun in these SOHO images; they're "opening a Hyperdiimensional 'gate'" with the (tiny!) discharge ... and MOST of the energy which comes flooding through and creates all the explosively visible effects -- the flares; the prominences; the coronal mass ejections -- is DRIVEN by that brief "tunnel"--

Leading to an Explosive Appearance of Energy in OUR dimension ....

This process is "breaking the torsion/hyperdimensional boundary between dimensions"--

Which, in 3-D ... "great concentrations of electricity" can "short out," momentarily -- thus, establishing that "bridge" BETWEEN dimensions--

And then, from this (literal) higher dimension ... a flood of raw energy comes rushing through ....

Setting off the fireworks that "the guys" last night were INTERPRETATING as purely "an electrical phenomenon."
6 hours ago · Like · 1 person

Uwe Langer wow ..bloody interesting , so you think the Sun is the key factor in opening a hyper- dimensional gate and create torsion fields on a massive scale ?
Is the Sun getting ready to open bridge between dimensions thus creating an EVENT that uni...
See More
5 hours ago · Like · 3 people

The sun IS a "hyperdimensional gate" -- ALL the time; that's where it's energy is aACTUALLY coming from (most of it)--

Opened up by the thermonuclear reactions which OPEN the "sungate" ....

But, in THIS window ... anything done in the vicinity of its alread VAST "torsion field effect"--

"Someone" is trying to LITERALLY "control the fabric of Reality" -- the torsion field -- by "doing" something in THIS HD window ....

And, whether it's "good" or "bad" ultimately depends on US.

Which is why spreading this virally across the internet is being SO effective.

"Awareness" is INCREASING ... and thus, the odds that they can get away with "pulling anything" now .. have dramatically gone down .... :)

Word Salad, obviously. Nothing can be pinned down or qualified. It's just so damned vague. He's RIFFING again!

BU, of course he is. Richard is nothing if not consistent in his behavior on stuff like this. The riffing is just that of a guy coming up with story ideas for a really bad pulp sci fi novel he'll never actually get around to writing. It's not like he has anything even remotely real to offer the mob, so he gives them the excitement of this stupidity. There are only two rules for this game; 1. It has to SOUND scientific and 2. It has to be unfalsifiable. I have to admit, Hoagland has been very good at following both those rules. :)